Lockdown? It's a bitch! Dau.II, like her sister 2 years prev, left home a few months before she was old enough to vote. After an au pair Summer in suburban Dublin, she shifted her duff to live with her bloke in the People's  Republic of Cork . For the last six years they've been living right in the City Centre. That was a big change from growing up as far as you can be from a bus-stop and still be in Leinster. But she was adamant that living in suburbia with a garden [lawn-mower, car, garage, 2.4 kids, annual Spanish holiday] was an unacceptable nebbishy half-way house. They were fortunate to snag one of the last landlords in the country with a shred of honour. The affordable mid-recession rent has never increased; despite The Market more or less doubling rental prices over those six years.

But living thrifty and having a really modest foot-print on our pillaged planet only takes living so far. In September, half of Dau.II's core social support crew went back to college and left town and Pandemic Man forbids her to talk to the rest of her pals. Neither of them are working and they're just haemorrhaging money for a really good 4th floor view of the River Lee . . . and access to the deli-delights of the English Market, of course. At Christmas, she floated the idea that she and her bloke might move one county East and live in her grandparents' old gaff in the Déise. It's flipping back to Lifestyle Remote but actually Costa na Déise is surprisingly well served for buses: 3 times a day each way between Tramore and Dungarvan.

And that would have been finio in The Before Times. Dau.II shops once a week on Wednesday which the Tesco Crowding App reports as being the quietest time of the week. She sits down in Tuesday night and plans the menus for the next seven days "It's way easier than trying to think in the supermarket". Sorry Tesco, no impulse buys in that family. But really in these Covid-days, you'd need a death wish, or at least a cranked up appetite for living dangerously, to get on a bus, even spaced out at 25% capacity. If you do the calcs, for a normal office fonctionnaire, in normal times their car is sitting idle (either in the driveway at home or in the office car-park) for > 90% of the time. [calcs for me: 90 commuting minutes a day M-F = 7.5 /168hrs = 4% active use rate each week]. It was my plan, coz I R retire, to pass the little Red Yaris, after getting her through the NCT in December, on to an enterprising Polish construction worker who wouldn't mind a few dings in the paintwork.

Then one of my rellies came home for good from Foreign and I added her to the list of insured drivers and handed the Yaris off on her until she found her feet. A cold coming we had of it [that would be TS Misogynist] in January. It was obviously going to be harder than I imagined to shake off a car that has been super-dependable for 8 years: hauling wood, dead sheep, sacks of feed, groceries, occasional passengers. It turns out The Pep, Dau.II's bloke, passed his driving test in 2014 more or less at the same time they started living together . . . in the city . . . with no need for a car at all at all. In those days, you could be taught by your Ma or Uncle Joe or really anyone with a car who was prepared to load their insurance to accommodate an absolute beginner. Having passed the test, you were good to go anywhere whenever you wanted - without having had any experience, let alone training, for driving at night or on motorways. Very shortly after than, the Road Safety Authority required beginners to swap their L plates for N = Novice plates for two years [prev]. At the same time they required formal instruction from a registered driving school, which was a huge bore for young tearaways who just wanted to get 💨Go Faster decals for their wheels.

After a turmoil of needless anxiety from me, it turned out that I could add The Pep onto the Yaris  insurance roster without any additional tearaway loading and last Wednesday I got up at dawn to {deliver the Yaris to | collect the 20-somethings from Cork}. We are in Level 5 lockdown; only "essential" travel is permissible beyond 5km. "Essential" is undefined and so far untested in the courts but the Gardai are now empowered to slap a €100 Fixed Charge Notice on anyone deemed to be transgressing these guidelines. The Media is a having an irresponsible field day reporting on a lot of edge cases: two pals done "for having a picnic" because they were consuming a Danish as well as lattes while taking a walk in a Dublin park; two lycra cyclists discovered exercising 20km from home; a lad who was found bypassing his local chipper and buying a rissole at a more distant emporium. Thus the only way to determine if "moving house" is essential is to pack your clobber in a van / Yaris and set out. I didn't sleep well the night before.

I dressed up in Full Patriarch [tweed jacket, open shirt, cravat, mask, recent silver hair-cut (self!!! I haven't been to a barber for 30 years)], because that almost always helps. I encountered only one Garda Check Point and was half way through my spiel "I'm going to pickup my dau" when I was moved on through "ghter who is moving house". The 20-soms were packed and ready when I arrived 3 hours later and with some ceremony I handed the keys to The Pep to drive us to his new gaff: 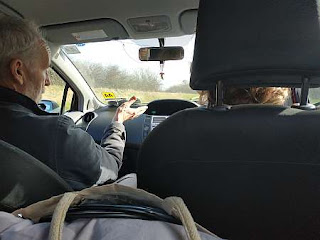 Driving a car is like riding a bike, once you've mastered the skills, it all come back to you quick enough. Except that cars are evolving rather fast and have zero conventions about where the controls for lights, wipers, air and heat are located. We agreed that, as well as L plates and N plates, P plates for can drive but am rusty would be better for everyone. Whatevs. I've been on plenty of white-knuckle car journeys as a passenger and last Weds wasn't one of them.
Posted by BobTheScientist at 07:43