I was a late reader /writer. I was really functionally illiterate until I was about 10. I could read, but I didn't. I could write but it was horrible to behold and took a hella long time to implement. Neat hand-writing is almost as efficient as short-hand for getting ideas / facts / data down on paper. Long after all my computers and phones have been sent to the Jack and Jill Foundation [which can unfortunately no longer turn dead e-kit into nursing hours] the written word will still be with us. I still have two foolscap loose-leaf blocks full of poetry which I copied out  as an exercise to develop my 'fine cursive hand'.

My younger teener self thought it was a good deal to buy new books. I was, in parallel, reading through the school library  and the books my parents owned at home. But my books and the conscious decision to buy them - of all the gin-books in all the towns in all the world -  helped define my sense of self. Later, of course, I realised that you could buy a lot more books at yard-sales at 25c and 50c; and that random books could be more interesting than chosen books. 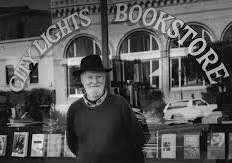 At some time in my mid-teens I lashed out a portion of my agricultural labourer's wage on Penguin Modern Poets #5 - Gregory Corso, Lawrence Ferlinghetti [L outside his independent bookstore in SF], Allen Ginsberg. I must have glanced at the contents and was maybe taken by the ragged ee cummings typography.  I copied out, between a bit of Landor and a bit of Wordsworth, with nothing from Corso or Ginsberg ; three of Ferlinghetti's poems Dove sta amore ; Come lie with me and be my love and Sometime during eternity :

I still have the transcriptions, although the Peng Mod Poets 5 has long-and-long gone beyond my control.  There was a time when I could recite Ferlinghetti from memory, but I had more or less forgotten that his poems seemed so important 50 years ago. Then Lawrence Ferlinghetti, born 24 March 1919 died on Monday 21 Feb 2021 [Guardobit] having clocked his century and then some. The news brought my younger radical poety self all rushing back at me - for heaven's sake get a haircut yeh young blaggard.