Are some of us more equal than others? Lord Sumption, retired UK Supremo and Lockdown Denier, thinks so. He caused a twitterflutter [start here?] last month when he said that a terminal cancer patient was less valuable than an age / class / colour matched woman with a life expectancy of several more decades. Sensitive people are really uncomfortable with these trolleology [bloboprev] metrics. I deliberately threw in colour / caste into the equation back there because that's where the slippery slope turns into a cliff of unfairness and inequality. A year ago when Coronarama overwhelmed the medical resources in Modena and other N Italian cites, the doctors had to decide who gets a ventilator.  It's called triage and front line field hospitals do it regularly in time of war / disaster. One thing that successful dovtors have in common is decisive decision making. They may not make the correct call but they are confident to Do Something.

I don't intend to help you out on the ethical dilemma of who should be saved but I did note that Alexander Grothendieck was saved by the concerted action of the people of Le Chambon. By singling out one of the most creative mathematicians for the late 20thC, I was implying that the other 2,000 diaspores who shared his 1940s sojourn in the Auvergne were less worthy of attention . . . but not less worthy!  The people [soccer stars, Insta-influencers, drug-barons, currency traders] who make out financially in this our screwed up world are not obviously those destined for heaven. All this bubbled up when I read the back story of Paul Crutzen who died, in the fullness of his years, on 28 Jan 21. 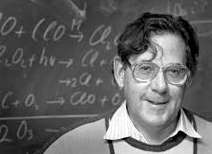 Crutzen [L] was born in late 1933 and was just starting school when his native Nederland was invaded and occupied by Nazi Germany. His school was commandeered by the Reich and getting educated was struggle. But it was as nothing to the struggle which civilians endured during the Hongerwinter on 1944-1945. Food was in desperate short supply, clean water was compromised and several of Crutzen's young school-mates didn't make it through to VE day. Crutzen wasn't a walking genius like Grothendieck, but he is remembered for two thinks that made a difference to how we view the world and our place in it.

He didn't make the academic cut as a teenager because he flunked a highly competitive selection process and went to a technical high school. He drifted North and in 1958 got a job as a computer programmer for the Meteorological Dept of Stockholm U. He didn't know how to programme! . . . but then neither did anyone else who was prepared to live and work in Sweden. Fortran was developing at about the same time, but Swedish meteorologists wrote in machine code because they were well 'ard. Predicting the weather is real hard as well and creating reliable futures for fishermen and hillwalkers required - and still requires - serious compute power. For a couple of years in the late 1990s I taught a short binfo course in Espoo, Finland. The machine room was shared by the Finnish Met Office. My INCBI server back in Dublin looked like a rather portly desktop computer. In the Espoo basement several walk-in freezer-sized grey boxes hummed quietly 24/7. The heat generated by the CPU cycles required a water-filled cooling system.

Because of his peculiar educational trajectory, Crutzen was never formally taught either Physics or Chemistry but he became really interested in the gaseous composition of the stratosphere. His epiphany was realising that the amount of NO2 which was produced by the natural action of bacteria in the soil, and its natural breakdown product NO might have an impact on the amount of ozone O3 in the upper atmosphere.

This at a time when farmers, agronomists and fertilizer companies didn't really appreciate that bacteria were anything other than an occasional scourge of carrots and potatoes. That opened up a whole new way of thinking about Gaia and in 1995 he was awards the Chemistry Nobel Prize for "for their work in atmospheric chemistry, particularly concerning the formation and decomposition of ozone". Not bad for a not-a-chemist.

In 2000 he was at a scientific meeting of International Geosphere-Biosphere Programme (IGBP) in Cuernavaca, Mexico. After yet another presentation about the state of the world in the Holocene [ie since the end of the last Ice Age 11,500 years ago) he started up and said 'Stop using the word Holocene. We're not in the Holocene any more. We're in the…the…the…the Anthropocene!'  A term is born! calling it the Anthropocene laid all the insults to the natural world [depletion of Ozone, bleaching of reefs, extinction of species, climate change, global warming, Bono] squarely at the doors of the human collective. And making it much more difficult to hold an evidence-based position of climate denialism. These small changes can have a disproportionate effect on the politics of planet and make it more likely that we'll do something rather than putting a shawl over our heads while tucking into another hamburger. It's 20 years ago but that word has done as much for climate justice as Greta Thunberg. Needless to say far too many people are expending far too much emotional energy fussing about the term Anthropocene and/or whether it started with James Watt's steam engine in 1775 or Robert Oppenheimer at Trinity in 1945.

Ignoring these detail-mongers, we might clack our klompen together as a mark of respect for Paul Crutzen who started a movement.