My two favorite 40-something Women of Science, Simone George and Aoife McLysaght both asked me to attend a meeting organised by ISAG to launch the #WeCanBeZero movement: Web -- Twitter . ISAG are the people who hosted a Town Hall in October, 18 weeks ago. It was interesting but data heavy and I fell asleep didn't get the feeling that they were likely to change the world.  A second webinar went out two weeks later and iirc even fewer people people turned up, so I wasn't alone in my mehdom. As any long-time opposition party in politics finds out, there is an enormous difference between sniping from the twitter-bushes <ahem> calling the Government to account and actually taking control of the reins.  That is much harder work and you have to deliver. Their 90sec propa ganda: 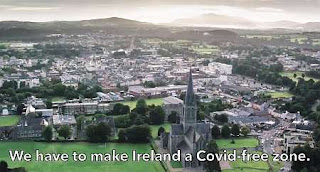 So four months later, on Monday 1st Feb 2021, I was back in the ISAG Hotel looking for compulsory quarantining international travelers - kidding! - there is zero compulsory quarantining for the few thousand randomers who rock up to Ireland each week. There is instead compulsory lockdown of the few million residents of the country. Because The Man stoutly maintains that quarantine is impractical, impossible, undesirable, ineffective and the cat was sick on my homework. Well, sod that. That message is no longer convincing to me any more and it is not convincing to at least 300 people who came to the launch of  #WeCanBeZero. 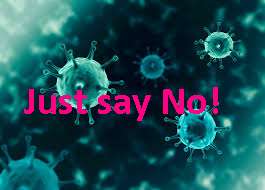 Come along, let's check #WeCanBeZero out. You might think that 300 warriors is enough to defend Thermoplylae from the barbarian hordes but they don't carry much weight in the Covid wars. You'd be wrong. As Simone pointed out, her nieces go to school [when it's allowed] and their mother is signed up to two class-based Whatsapp groups comprising 80 people. Those 80 people are FB pals with 80 people who . . . and soon with six degrees of separation you have a movement:

cue Alice's Restaurant - 1967 for all you under-60s
You know, if one person, just one person does it they may think he's really sick, and they won't take him. And if two people, two people do it, in harmony, they may think they're both faggots and they won't take either of them and three people do it, three, can you imagine, three people walking in, singing a bar of Alice's Restaurant and walking out. They may think it's an organization. And can you, can you imagine fifty people a day, I said fifty people a day walking in singin' a bar of Alice's Restaurant and walking out. And friends, they may thinks it's a movement! And that's what it is, the Alice's Restaurant Anti-Massacree Movement, and all you got to do to join is sing it the next time it comes around on the guitar, with feeling. So we'll wait for it to come around on the guitar, here and sing it when it does . . .

Of those 300 people a handful were opposition politicians: Ivana Bacik, Alan Keely [Lab]; Richard Boyd-Barratt [PBP] Róisín Shortall [woz Lab, now SD] and zero from any of the government parties. It was ever thus! Those in power (even for five years) have no interest in listening to dissidents; because that would require a change of mind  . . . and that would involve an admission of previous error. Just listen to any pol being interviewed on the wireless, they never admit to a) being wrong b) being to blame for adverse outcomes. Tefloniticians. This is not the mindset of maturity but rather the squirming of a six-year old with soiled pants [I was that kid, I'm still squirming 6 decades later]. Róisín Shortall said that, IF you get fed up asking persistently, fruitlessly for leadership THEN it is time to take the lead yourself. Go People! Nevertheless, it's not a coup yet: we were all invited to tweet @MichaelMartin or @Taoiseach requesting and requiring him to make this the last lockdown on the island . . . by embracing #WeCanBeZero as a practical aspiration. Get the numbers down, way down and then keep them there: hello NZ, Oz, Taiwan, SKorea, Singapore . . .

The ground for such a drift of thought-seeds might not be entirely stony. Micheál Martin, when Health Minister in a distant Fianna Fail government, implemented a ban on smoking in pubs and other public places as from 29 March 2004. It was brave, risky and not politically necessary. The public discourse was loud that such a ban was impractical, impossible, undesirable, ineffective but he persisted. The legislation was passed; the sky didn't fall; I could go for a drink without coming out stinking; bar-staff could breathe; and everyone flipped to say they'd been all for the change all along. Several European countries followed Mr Martin's lead to implement their own bans on the custome lothsome to the eye, hatefull to the Nose, harmefull to the braine, dangerous to the Lungs, and in the blacke stinking fume thereof, neerest resembling the horrible Stigian smoke of the pit that is bottomlesse. His glory days will come again with ZeroCovid, if ISAG, and you, and I, can pitch it to him just right.

One of the present pols, Alan Kelly, I think, noted that Martin was already shifting his ground by using the phrase "persistent suppression". Canny politicians are happy to concede a point when it is a form of words, so that the opposition can tell their constituents about their famous victory. Matter a damn what we call it, so. I'll vote for persistent suppression even though I think The Beloved's LoCo - you'd be mad not to! is catchier. Philip Nolan Chair of the Irish Epidemiological Modelling Advisory Group from NPHET is one of our highest profile talking heads, he thinks ZeroCovid is a huge risk. Dude has something to say about that . . .
Posted by BobTheScientist at 07:41