If you have math-able kids, it can be fun to play some guestimation games.

BBC via The Conversation via More or Less gets the order of magnitude on how much SARS-CoV2 there is out there from Christian Yates of U. Bath. His wife, who lives with the guy, suggested it's either a teaspoonful or a swimming pool, it usually is.  They are Landmark Numbers, for positioning us in the world of quantity. Don't click on the link until you've given it a go with your 12 y.o. If you have a kid who is not math-able it's possibly because this sort of think-fest has been absent. Dau.II used to think that way, and probably still does because she's a fan of More or Less, Tim Harford and his books.

Guestimation is important for critical thinking because it forces you to lay out your assumptions and have a punt at the size of the numbers. Not precise numbers, but order-of-magnitude numbers. For the teaspoon or swimming pool SARS-CoV2 question you need to find out [roughly]:

I used to do a similar exercise with my Yr1 remedial math classes: How many trees are there is Ireland? A reliable minority of each class would be quite resolute in saying "[la la la can't hear you] I have No idea". Often, in my Socratic toga,  I'd take them to the window and invite them to count the visible trees? "Okay, so in Ireland it's more than 25! so you now have some idea". Sometimes that started them, reluctantly at first, thinking. I've shown my working that 4 cups of botox is enough to kill everyone on the planet if distributed evenly rather than unfairly concentrating the stuff in film-stars' faces.
One of the arguments against lock-down was that it was inappropriate to shutter large sections of the economy and prevent all social interactions because a) the very old contributed disproportionately to the roll-call of death b) very old people have a low life expectancy. While acknowledging there was an upblip in the number of deaths when the cases spiked, we were warned to check back later to see if deaths from pneumonia, 'flu, stroke, dementia, heart failure and cancer were down . . . because those 'normal' dead had been carried off a few months early by CoViD-19. I haven't seen any such follow-up from, say, the Irish CSO. They work careful, but they work slow and currently they only have available hatches and dispatches for Year 2018 or quarterly breakdown for Q2 2020. 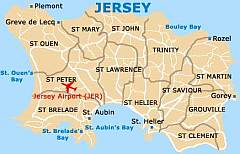 But I did get an annual report for Jersey, from my pal Dec who lives there. In contrast to other island nations, Jersey seems to have followed the UK [and Ireland] in doing too little too late on border controls. With the result [much handwringing] that the fatality rate per 100,000 is among the highest in the world. Guernsey, the neighbouring, smaller, bailiwick clocked half the rate of fatalities. But here's the thing: the overall count of deaths from all causes is down in Jersey for 2020 compared to previous years. This paradox is unexplained; could be a statistical blip; and is hard to analyse statistically because the absolute numbers are so small: 674 dead of which 59 are CoViD related. hmmmmm?
Posted by BobTheScientist at 08:45