The kindness of neighbours

Last week I wrote about being left home alone without wheels for 12 days and having to bust open Das Brexitbunker to survive on my 7 hectare lifeboat. My Elderly WaterGipsy Neighbour called this hair-shirt blaggology for the bluff it was. "Absolutely loved the image of you as my Elderly Protestant Neighbour, thriftily living on Industrial bags of Fusilli and the last of the Greens in the garden, burning stumps of gorse to keep warm". On Friday she had a legitimate reason to drive to Dublin and offered "On the way home, I may swing past to leave some Shop Goodies on your doorstep, since you are housebound". And it was so. Just as I was thinking that the day had been long enough for my Elderly Protestant bones and I could decently retire to bed with a hot-water bottle, there was a scuffle outside and a knock at the door.

It was Lulu of the Generous Hand with a rainbow of colourful, healthy, fresh food: 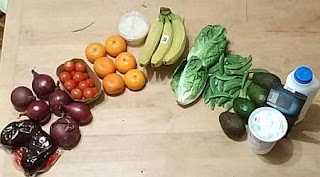 Apart from it being super kind and supportive; it's interesting to have my food boundaries stretched a little by someone who cares. It's like having a bag of lockdown books delivered which were chosen by Dau.I the Librarian: she may know her parents better than they know themselves. Apart from the milk and the tangerines, I don't think I would have bought any of the items on Lulu's shopping list. That's mainly because The Beloved doesn't trust me to do the shopping. She has only limited capacity for block Lidl cheddar, more fusilli, potatoes, tinned tomatoes and reg'lar onions. I think they both deprecate my choices - are we meant to live or merely exist? - but between us all we try to step lightly on the earth without beating up on ourselves for being here.
Today is Imbolc, St Brigid's Day, when we can officially start to think about Spring and planning a year of home grown food. Soon enough, I'll pick out the biggest, shiniest black beans which I saved from last year and start them off in pots. We can get frost as late as the first week in May, so it would be risky to plant them out too early, but that's why we have a polytunnel.
Posted by BobTheScientist at 07:27