[another cock-up with scheduling published this last night on "3rd March", it's back here for today's post today]
Piece in Wikipedia about the Double Eagle (A gold coin worth $20US) struck for commerce between 1849 and 1907, got me to thinking about the relative value of silver Ag and gold Au. At the same time as the Double Eagle was designed by James B. Longacre, the US mint also launched a shirt-button size gold dollar, here shown more or less actual size:

Same designer 1.62g 1.27cm = half-inch across. This micro coin was appreciated aesthetically "undoubtedly the neatest, tiniest, lightest, coin in this country ... it is too delicate and beautiful to pay out for potatoes, and sauerkraut, and salt pork. Oberon might have paid Puck with it for bringing the blossom which bewitched Titania." but others felt it was too small to be of practical value for shop-keepers and farmers. The Double Eagle was exactly 20x the weight of the gold dollar and both incorporated 10% copper Cu to give the coins a bit more robustness and wearability. 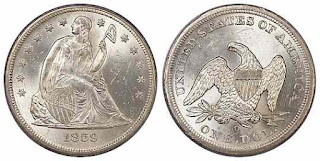 At about the same time the US mints [there were, and are, several across the country] struck a silver dollar which was an inch and a half in diameter and designed by Christian Gobrecht  26.37g 3.8cm ⌀. The silver US dollar was first authorised by the fledgling state during the Revolutionary War (1776-1783) in conscious imitation of the Spanish Thaler which was worth Eight Reals. The Spanish coin was the Talk-like-a-Pirate parrot speak pieces-of-eight only distantly related to Jack Sparrow et al.'s Court of Pieces-of-Eight. In those days, the 8-real coin was a bit heavier than the US dollar but traded at parity in the Caribbean. The Spanish dollars were melted down and reminted as US Dollars with the extra clippings deemed to be seigniorage - essentially profit on the transaction. This is a classic example of Gresham's law - bad money drives out good. Only old and foreign coins were in circulation in the United States as speculators siphoned off full value coins to enrich themselves. I've been on about melting scrap-copper for cash.

The weight of the two 1849 vintage coins allows us to calculate the relative value Ag/Au as 16.3x. In my lifetime 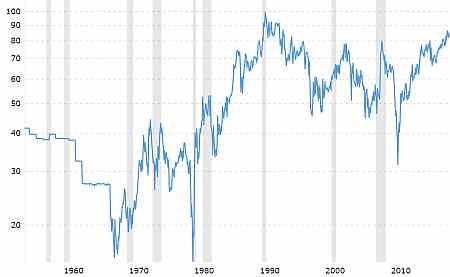 What's significant about the year 1849? It's when the California Gold Rush started to flood the economy with gold; but this didn't seem to have any effect on the value of the commodity. The Australian Gold Rushes of the 1850s likewise had no effect on the price. They say there are now 150,000 tonnes of gold above ground of which 60% has been abstracted from the ground in my lifetime. Up to 1849, after 6,000 years of mining the stuff, 10,000 tonnes had been accumulated world wide and about 10 tonnes was being added to the stockpile each year - mainly from the Gold Coast = Ghana and South America. California upped the annual input about 8x to about 80 tonnes average for 1850-1855. That sounds like a boost but was still only 1% of the existing reserves so not really a drug on the market. The New South Wales supplied 25 tonnes in 1852. Beyond those comments is the realm of Economics about which I have no expertise and little interest.
Posted by BobTheScientist at 07:17