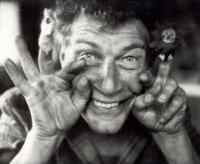 John Berger [L with finger puppets] was born on 5th November 1926 which mean he's just turned 90. He needs to be honoured for taking an uncompromising Marxist stance against the tide of political centrism. You may think he's wrong, he may indeed be wrong, but the fact that a man of his erudition and sensibility takes that position should make us take note and maybe take stock of our own certainties. Berger has threaded through my life and occasionally he has given me a profound jolt lightning that lit the world from a different angle. 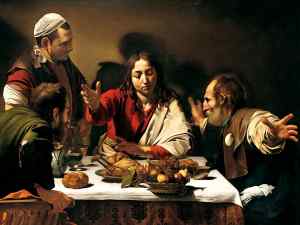 In 1972, as I was in the process of leaving home and access to television, the BBC put on a four part series on European Art and art appreciation that was created and narrated by John Berger. It was called Ways of Seeing and deconstructed everything we knew about the world of painting between 1400 and 1900. Bless Youtube because 40+ years later you can see Episode I and have your sensibilities shook. At one point, he shows a group of eight year olds a picture by Caravaggio called Supper at Emmaus [R] which is now in the National Gallery in London. They discuss this dramatic painting but are bemused as to what sex is the central character. It turns out that the central character is The Risen Christ albeit a little incognito because his beard is missing. Berger develops this ambiguity by pointing out that Caravaggio was homosexual and may have been quite ambivalent about gender. So obvious, so simple, probably so trite an explanation from the perspective of 2016 and marriage equality but in 1972 it seemed profound. The scripts were editted and bundled into a book of the same name which is still in print in Penguin: good timing for Christmas presents for art students.

In the same year, he published a fin de siècle novel called G which The Beloved and I devoured when we met the following year. I was far too young to understand it. G. won the Booker Prize and Berger slagged the sponsors for making money in the sugar-trade and made a show of giving half the loot to the Black Panthers and retaining the rest to push forward his researches into the plight of migrant workers in Europe. This was eventually published as A Seventh Man.

Perhaps the most accessible and interesting of his early books is A Fortunate Man: The Story of a Country Doctor (1967) - reviewed in the Grauniad.  It is a celebration of the ordinary in the life of an extraordinary rural GP in West England who is still in the 1960s a General Practitioner, setting bones and delivering babies rather than just prescribing anti-biotics and referring patients to experts in hospital. The book is a pas de deux between Berger writing a life in telling vignettes and anecdotes and series of stunning photographs by his collaborator Jean Mohr. It is now back in print. You should buy it for your favorite medical student.

The Boy was born in 1975, the following year we got to see Jonas qui aura 25 ans en l'an 2000 a film directed by Alain Tanner and written by John Berger.  We ate that up as well, because we were on a films-with-subtitles jag, that hasn't stopped running. Here's an excerpt about the nature of time and the horrors of capitalism. As December 2000 approached and The Boy turned 25 like Jonas, I tried really hard to get him a copy of the film but it was unavailable in those pre-Youtube days. But I was able to secure a copy of the script as a wholly inappropriate birthday present.

Finally and up to date is a birthday hommage from the the filmista Sally Potter in the Grauniad. If you haven't seen her amazing film The Tango Lesson then, friend, you haven't danced. Okay then, you can have some more . . . tango. Sally Potter makes it clear that John Berger is still, at 90, inspiring and provoking us to think.


Posted by BobTheScientist at 07:27