And so to bed

I've mentioned Samuel Pepys in passing because he was alive and writing in The Plague Year of 1665. It's his birthday 23rd Feb 1633 today. He started recording his life and times on 1st January 1659/1660 because new decade. And also because his wife had just endured an early miscarriage: Blessed be God, at the end of the last year I was in very good health, without any sense of my old pain but upon taking of cold. I lived in Axe yard, having my wife and servant Jane, and no more in family than us three. My wife, after the absence of her terms for seven weeks, gave me hopes of her being with child, but on the last day of the year she hath them again. I have a sense of empathy because I started recording my life and times in January 2013 because new job.  Pepys is of interest to us now because of the insight he gives about day-to-day life for a well-heeled official in Restoration London. It spares no blushes and he has little shame about his bowels, and especially his water works - having been cut for the stone just before the diary starts. cut for the stone was surgery, without anaesthetic and with sketchy asepsis, for the removal concretions in his urinary tract - yarooo! He also had an eye for a pretty young woman and was, on at least one occasion, discovered by his wife while groping their maidservant. At least one of his many mistresses negotiated advancement for her husband - a shipwright and carpenter.

It would be like me to be particular in transcribing the diary in 17thC English rather than in today's vernacular, but that would make it, apart from proper names, incomprehensible unless you dear reader are fluent in Shelton's short-hand. But the fact that this shorthand records how thing sound rather than how they were formally written gives historical linguists insight in how words were spoken by people of his class and times. He ate 'ysters, for example, and suffered from b'ils on his neck, sounding a bit stage-Irish to modern ears. The brilliant, searchable, Pepys Diary site is maintained by Phil Gyford. 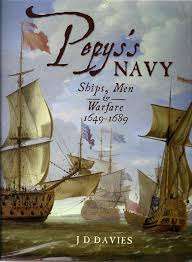 At the start of the Diary, Pepys was Clerk of the Acts to the Navy Board, which allowed him the patronage to give William Bagwell a leg up in his shipwright career, even as Pepys got his leg over Mrs Bagwell. He was an efficient and conscientious bureaucrat for the Royal Navy and rose to Secretary of the Admiralty - implementing new policies for victualling the fleet and [not] paying the sailors. Because of his enquiries, sailors were entitled to receive a daily quota of one gallon of beer, 1 lb / 500g of biscuit, 4 oz / 100g of salt beef or fish, butter and cheese. And he ensured that supplies were inspected for quality. Some call him the father of the modern Royal Navy. He also started the requirement that ship's officers should pass a competency exam in mathematics and navigation. No GPS then, only sextant and log tables. He corresponded with Isaac Newton about probability, was elected to the Royal Society and served as President of that body in the 1680s. So to his contemporaries he was a man of parts and none of them knew about his diary.

So to the Privy Seal, where I signed a deadly number of pardons, which do trouble me to get nothing by. Home by water, and there was much pleased to see that my little room is likely to come to be finished soon. I fell a-reading Fuller’s History of Abbys, and my wife in Great Cyrus till twelve at night, and so to bed. [7th Dec 1660]