I am plugging away at the sack of books which Dau.I lifted from the idle and dust-gathering shelves of her library and sent where they might be read by someone. I heartily recommend Reading the Rocks: how Victorian geologists discovered the secrets of life by Brenda Maddox. She wrote an excellent biography of Rosalind Franklin [reviewed] but hasn't limited her biographical chops to scientists.

The thesis is that, in 1800, rocks were rocks, history was short, all life was created species one at a time, and man was descended from angels with no relationship at all at all to gorillas, chimpanzees or orang utans. By 1900, it was all over bar the shouting biblical fundamentalists: rocks were full of fossilised creatures, which appeared in predictable sequences of related forms, and these data were key to understanding where we [all: people, porpoises, parrots, petunias] came from. The change of view was wrought by hammer on rock-face , and ding-dong debates at GeolSoc and other venues. Not everyone behaved nicely. For too many of the stars it was more important to be right - and the other fellow wrong - than to be correct. On the other hand, there are many instances of people agreeing to differ and still remain polite, and even good friends.

One place to start is the publication, in 1815, by William 'Strata' Smith, of the first geological map of Britain. He tramped across the land with hammer and note-book paying particular attention to the fossils in the surface rocks, he noted that one group of fossils was replaced by another along rather predictable lines across the country. He coloured his map accordingly and produced a thing of beauty which was commercial gold. Entrepreneurs knew where they would be at nothing in the search for coal, which was being increasingly shovelled into steam engines which drove the industrial revolution. He tramped everywhere because, surveyor and son of a blacksmith, he couldn't afford a carriage.  In 1819, George Bellas Greenough MP, first president of GeolSoc published his own glossier, more detailed, map which rapidly eclipsed Smith's. Thereby diverting cash sales from the poor to the already rich, a tendency which we see even into our own time and not only in geological turf wars.

Have you ever wondered why Western Britain obtained naming rights (Cambrian Ordovician Silurian Devonian) for most of the Palaeozoic Era? Probably not unless you had enough classical education to twig that Ordovices and Silures were pre-Roman Celtic tribes in N and S Wales, respectively. The reason is because British geologists were waaaay ahead of the counterparts in North America and continental Europe. Although scientists are meant to robustly test / challenge to destruction their own hypotheses, they are human enough to cherish their intellectual babies while denouncing the brain-children of rivals as ugly, stupid and scarcely worth of attention. The Ordovician was created by Charles Lapworth FRS in 1879 to act as a neutral buffer zone between Rev Adam Sedgwick FRS's Cambrian and Sir Roderick Murchison, Bt FRS MRIA.'s Silurian period. Sedgwick and Murchison had been friends and hammer-buddies in their youth. Sedgwick refused to speak to his pal for decades because Murchison started to colour his published maps with the whole of Wales as Silurian. Not very Christian, you chaps; and a rather pathetic role model for scientists at the top [FRS FRS FRS] of their profession. 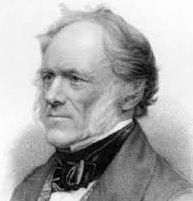 Sedgwick featured largely in the education of Charles Darwin who didn't absorb much of the lesson in how to bitter controversy infect your whole life. Brenda Maddox's book gives a central place to another of Darwin's mentors Sir Charles Lyell [L, whose mutton-chop whiskers were by no means distinctive in that time]. A biography is different from a text-book because the best of them bring in colourful biographical detail in the hope of showing how real people came to have their best ideas.  Lyell, like his younger contemporary Charles Dickens, got on the lucrative American talking celebrity circuit. He and his wife Mary went on four transAtlantic tours snowing the colonials with a blizzard of fossiliferous facts. He also drank the Slavery Kool-aid writing that plantation slaves seemed to be better off, and better behaved, than the Irish navvies who lived and worked in the same counties. This sort of talk really jangled Darwin's chain, coming as he did from staunch abolitionists on both sides of his family. But Charles L and Charles D remained good friends despite this political and many scientific and religious differences.

Maddox also cites the courtesy that existed between Darwin and Wallace over the biggest idea of the 19thC. Much has been made of the disparity in wealth and connexion between those two men and how Darwin carried away the celebrity recognition prize because his well-placed pals fought his corner. But my reading is that Darwin was kind, loyal and good company as well as being super hard-working, diligent, focused and clever.  Wallace lived out his days - he died in 1913 at the age of 90 - rather in awe of his more famous colleague. Reading the Rocks is defo worth reading for filling in the gaps in the stratigraphy of science as well as the science of stratigraphy. And it's appropriate to be giving plaudits to Darwin on this day especially: his 212th birthday!

Posted by BobTheScientist at 09:01