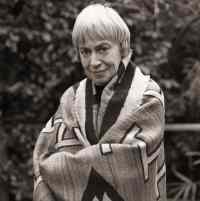 I occasionally scan 3quarksdaily to see whaaaaat's happenin'? on the liberal arts front. A tuthree days ago I was pointed to a delightful essay in Granta in which Alison Smith gives a very personal tribute to Ursula le Guin. In 1988, when Alison was 18 and Ursula about 40 years older, the famous writer came to visit Rochester NY and the young student was assigned to be her gopher-chauffeur for the week. Alison had been a huge fan of Ursula's books since she was a bookish sub-teen but didn't get gushy and completed her minder's assignment with discretion, honesty and empathy. My reading is that the author found her company far more congenial than that of the English Faculty, who covered their awe of the famous write with a layer of bluff blokey bravado that must have been tedious if not oppressive. By the end of the week young Alison had been transformed by the respect and kindness of the older woman into someone with ambition, confidence and a, probably misplaced, fascination with French culture. She was also determined to be a writer, rather than having pretensions to being an author. To this end she started writing, more and with more regularity [ahem - like myself], until now 30 years later she is scrabbling some sort of a living from her craft. You should read the memoir. If you have a bookish, possibly gay, teenager / twenty-something about your household then you should be sure to make a copy for them. Ursula le Guin died this time last year - I've written my own tributes.

About 15 years ago, The Beloved TB came out . . . and embraced the practice of the Vietnamese peacenik and Dharma teacher, Thích Nhất Hạnh. After being exiled from his native land during the Vietnam War, TNH started a community in the Dordogne Valley in SW France called Village des Pruniers / Plum Village. Round about the time that I went on my transformative pilgrimage to and from Santiago de Compostella, TB went to Plum Village for a week of meditation and silence and underwent her own transformation.

We subsequently fixed up a telephone booth in the yard at home to facilitate our emergency clothing changes before flying off to rescue sheep caught in wire fences. In 2006, we took Dau.I and Dau.II to Plum Village for the Summer Retreat because it was billed as For Workers in the Neurosciences. I've written about how a succession of contingent accidents found me addressing 1,000 participants about Mindfulness in Medicine. I was famous for five-and-a-half minutes [me and Onnie were so taken with the theatre that we ran over by 30 seconds].

In 2011, Plum Village announced that, as their retreats were getting flooded by Irish citizens in need of mindfulness, Mohammad TNH would proceed to the mountain four green fields of Ireland . . . and could somebody local make that happen? That somebody materialised as a small committee of dedicated TNH fans including The Beloved. It was like having to organise part of the World tour of a middle ranking rock band [with fewer drums and guitars, but more bells and saffron. . . and no drugs or alcohol]; because Hissonour announced that his party would include at least 50 monastics from Plum Village. The Itinerary settled down to a) Filling the Dublin Convention Centre with 2,000 bodies for an evening talk; b) Filling the Killarney Convention Centre for a three-day retreat for 800 people; c) Addressing the Norn Iron Assembly at Stormont. A succession of contingent accidents found me as the designated driver of the Popemobile a rented 7-seater people carrier. With my grey hair, dismal-Eeyore demeanour and dressed in my interview-wedding-funeral suit with a sober tie, I looked the part. A peaked cap would have degenerated the costume into parody, so I skipped that. 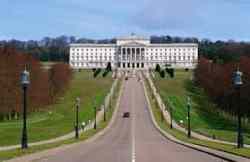 Very respectful I was too:  not speaking unless addressed, not restlessly searching for soccer commentary on the radio, doing my best to go easy on the gear-changes. There was one dicey moment on the way up to Stormont [R] when I missed a turn in suburban Belfast and did a quick-thinking U-turn neeeeooooww across two lanes of oncoming traffic. The monk sitting in the passenger seat turned a whiter shade of pale but the VIPs in the back seats were in a state of satori - they didn't yelp! anyway. The following day we headed back to Dublin. TNH elected to sit in the front seat to see a bit of the countryside; his team of attendants sat in the back singing Vietnamese pop songs and generally larking about - because the Stormont gig had gone rather well and we were all relaxing. TNH was quietly amused by a sign on the Gormanston toll-booth:

Arrive Alive
and when we finally pulled into the place they were staying in Dublin that evening, he put his hand on my arm and said "Arrive Alive" with a little nod of appreciation. Maybe he'd been more alert than I thought when I did the two-wheeled U-ie the day before.
Posted by BobTheScientist at 07:56