Bringing out the best 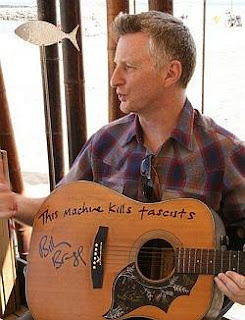 Leadership - it's a palpable quality: Some are born great, some achieve greatness, and some have greatness thrust upon them [That would be Shagsper's XIIth Night]. In this Plague Year, the Born Great have been found wanting: the rich know-nothings who have sailed to the top in the UK and USA have been conspicuous by their self-interest, self-absorption, ignorance and mendacity. Going to Eton and knowing a few Latin tags are the hall-marks of privilege rather than of education. With chaotic messages and culpable negligence from the top someone has to call the shots, make the difficult decisions, keep calm and carry on.  That last phrase is a slogan, a meme and a sound-byte: it will not save one life or kill one virus. Slogans have their place: on Billy Bragg's guitar [R] which echos the same words on the Instrument of The Man Destruction owned by Woodie Guthrie. Remember that the USA is 50 different countries [and Canada similarly fragmented] so the response to the crisis has been taken up with more foresight and maturity in some states than others.

What is required for each community is a plan, commitment, trust, an inventory of essential kit and the logistics to coordinate these streams so they get to right place at the same time. Masks need doctors; respirators need electricity; hands need soap; thermometers are handy too. The medical crisis will run in parallel with a life-as-we-know-it crisis. Everyone has to eat, keep sane, obey orders. Being useful in the crisis is for most of us is like our brand of home-education: shut up and get out of the way of the Effectives. They also serve who only stay at home. This Covid leadership debacle - the cowardice, the refusal to learn, the ignorance of evidence and lack of imagination - has allowed less privileged and harder-working stars to shine. 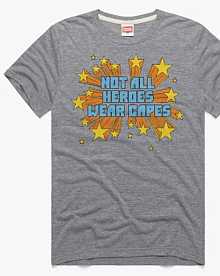 Dr Amy Acton, is the Ohio Health Director, working under Governor Mike DeWine, to save The Buckeye State from going under. She is refreshingly candid about: the failure to prepare for this even when it was obviously on the way; the lack of coordination between public and private health care; the lack of tests and testing reagents; woeful lack or PPE to keep the virus out of the airways of the workers on the ground in hospitals, care-homes and in the wider community. It is an antidote to Washington, although not really a cause for optimism. She has a fan-base among the plain people of Ohio who have nothing really to do except watch the train-wreck unfold on the local TV Channels. A local T-shirt company is selling a new Homage-to-Acton shirt [L] that will raise money for a couple of local charities. Acton gives credit where it is due and knows how to make people feel good about themselves and their community, even if it's by proxy. A long-time customer of a store which was going to have to close left a $2,500 "tip" for the laid-off workers. A logistic company put trucks and drivers to work for  the state: we'll haul anything up to 2,000 lb weight, anywhere it is needed.

Dr Emily Landon, lead epidemiologist at U Chicago School of Medicine has also been brought forth as the Spokesperson for Illinois' response to Covid-19. With the Governor, commendably, stepping back from the podium to recognise that he doesn't really know enough to act effectively with Effectives. Obviously, elected in a democracy, he is the person in/on whom the buck stops; but different Governors have been more or less capable of taking evidence-based decisions. They have also had a patchy record in privileging the people over the economy. Many on the Right are barely capable of distinguishing between benefitting employers and corporations from benefitting the country. Landon goes on: Our medical system doesn't have any slack, there are no empty wards waiting for patients or nurses waiting in the wings . . . she contrasts the responses of St Louis [lock-down] and Philadelphia [business as usual] to the 1918 pandemic. The results of this experiment are in the coffin-count. These data are where we get the idea of flattening the curve; the area under the St Louis curve [=total bodycount] is half that of Philadelphia (although it went on longer): 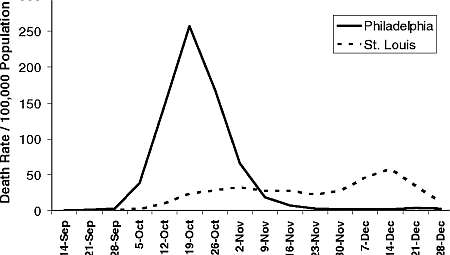 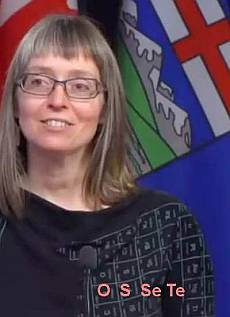 And because The Best comes in Threes, let's look at Dr Deena Hinshaw [L] Alberta's chief medical officer of health MoH. She also has a sartorial message: in this report she is wearing a Periodic Table of the Elements dress - just to show that what she says is likely to be evidence-based rather than nonsense or a white-wash. I've picked out the oxygen sulphur selenium tellurium column because I wrote about it before in my biog of Jane Pinsent. Hinshaw's Patrick's Day message is that all bars will be closed now. But also gyms, swimming pools, community centres, bingo halls, bookies, museums, art galleries, science centres. and libraries. These are significant inroads into the personal freedoms of Albertans but the scope of closures is so wide that no group can complain that they are being picked on/out. The commentariat have expressed, a slightly patronising, surprise that this quiet medical researcher is stepping up to the podium as if to the manner born. Oh, yes, and she has inspired t-shirts too: What would Dr Hinshaw do? Or: We are all in this together; which echoes Dr Hinshaw's empathic 'call-sign'. This person is on top of her brief, she's hopeful, realistic, inspiring and smart as a nest of owls: she deserves a medal and a good night's sleep.

Finally let's give a flutter of hands to the signers [bloboprev] of these Messages:

More Women in Science
Posted by BobTheScientist at 07:29