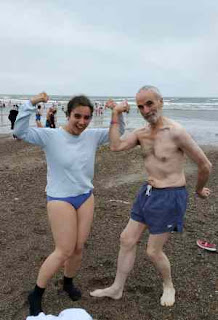 I'm blessed with two daughters so different in looks and temperament, as to make us suspect that one [or both] of them had been swapped into their cradles by the fairy-folk. On Christmas Day in the morning, the baby Jesus wasn't the only one wrapped in very little. Just before Noon, about 200 people stripped off and strode about in the surf at Tramore strand until their feet turned blue. Probably 5x that number stood on the prom in their overcoats watching events unfold. Dau.I was game to get allll wet with her old man; Dau.II was more about minding their outer garments. But those differences may be as superficial as judging them by the colour of the eyes.

As I wrote in May, book-worm Dau.I was early on marked down to work in a library or, at a pinch, in a school. She is now fulfilling that destiny: critiquing the Dewey Decimal System; stopping people eating their lunch into the computer keyboards; culling books for discard; suggesting books for dyslexic children, thanatophilic Agatha Christie fans and precocious 12 year olds. Knowing her father, for Christmas she gave me a little hand-bound booklet of Essays about Librarians which she had culled from the interweb. It was flattering that she included my own tribute to one of the profession. Another essay was about the questions a librarian has had to field when she was installed behind the Reference Desk. Obviously Dau.I felt a frisson of empathy for those experiences. A perennial question is when a patron tries to locate a much loved book [try sources] while s/he can remember neither the title nor the author . . . but is certain about the colour of the cover. That task is, on the face of it, damn-foolish but a good librarian who cares about their craft (and has read a helluva lot of books) can probably abstract more information and may even be able to locate the book.  Dau.I told me a great synchronicity tale a few weeks ago. Having spent chunks of her childhood on the Waterford coast, she was well aware of the Missing Postman of Stradbally. Re-shelving a trolleyful of books she came across a copy of Fachtna Ó Drisceoil's book on the story. Before lunchtime the same day, a chap from Roscommon dropped by asking in very general terms for such a book which had been recommended by a friend. Dau.I could not only identify the book but could put her hand on it without checking the catalogue. Rosco was amazed at this near miraculous "instant gratification" solution to his query.

You might think that working, like Dau.II, in a delicatessen is as different from librarianship as a CD player is from a tricycle. But as both of the latter work because of things that go round, so the different professions of the two sisters have a common theme of service and empathy. In the run up to Christmas Dau.II has been selling the most fantastical quantities of cheese, paté and salad. Daily she has been dealing with people who are unbelievably ignorant about food even as they shell out wodges of folding money to buy some. "That Cashel Blue which is like Gruyère . . ." the only thing those cheeses have in common is that they both came through a cow's teat at an indefinite time in the past. But when asked "I want the goat's cheese that catches you gk gk gk in the throat", Dau.II is on message: she knows exactly what that customer is trying to articulate because she's been there all too often herself. If they've run out of one variety on Christmas Eve, she can find the client a nearly-right substitute. Usually the nubb-ends of cheese are recycled into quiche the next day, but with a three day holiday this doesn't work. We had a wonderful range of cheese varieties for Christmas and Stephen's Day: snatched from the jaws of trash.
Posted by BobTheScientist at 07:39