My gloomy verdict on the fate of a string of small Indian islands brought to mind another island planting story which also had a gloomy outcome. 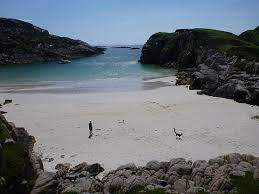 20 years ago, my sister lived for several years in a community on the island of Erraid; 270 hectares [almost exactly a square mile] of rock and moorland off the West Coast of Scotland, which, in a previous century, had a starring role in RL Stephenson's Kidnapped; you can walk to the island at low-tide. It was wonderful in the Summer with a private white sand beach [L] on the far side of the island from the village but the relentlessness of the Winter gales eventually got to my sister and she moved South to Severnside.

One winter they decided to plant some hundreds of trees - maybe Scot's Pine Pinus sylvestris - they order up the saplings, set to work together and planted the trees across the side of a bare moorland rise. They all died. With 20/20 hindsight they realised that they could have achieved their aim if they'd spent 10 or 20 years at the task. First to identify a fold in the ground that was sheltered from the bitter cold salty gales of West Coast winter. GPS was not necessary to identify such a sheltered spot; you just had to look where there was a clatter of blasted hazel, willow and hawthorn. A few birch (fast growing, hardy enough to over-winter in Finland) and a few Scot's planted in the lee of the existing brush would, with luck and good staking, survive to provide a taller shelter belt for subsequent plantings. This is what would eventually happen anyway with the natural succession from bog to boreal forest. But people can't wait till their grand-children are grown to make their mark on the landscape. So the protocol I've outlined is a way of ooofffing on the natural process to bring it along a little faster.

Our half hectare of forest, planted in 2007-2009, is doing very nicely, thanks. We planted whips of Scot's Pinus sylvestris, larch Larix europaeus, ash Fraxinus excelsior and larger stumps of oak Quercus robur as well as a gallimaufry of native trees. Active support took a while with us having to give the tiny trees an edge over the grass, but then they took off and many of the trees are now taller than our two storey home.

Starting a woodland is a bit like Aikido where you don't attempt to block the Ki of your opponent but rather divert its energy into a path that is of more benefit to you. Ah So's to you too, mate.
Posted by BobTheScientist at 07:26