It may seem like a distant memory but the resounding, if far from unanimous, Yes in the Marriage equality Referendum is only last week.  Before we move on to free other dispossessed groups in our society, I'd like to share a few images and ideas in case you missed them. I am partial to a touch of irony and I reckon that satire is one of the most powerful forces in a free political society. Satirical irony is about the only vehicle for public dissent in un-free societies: it depends on The Man being too pompous and dense to get the joke. One of the key posters in the No campaign was a pious nonsense about what children deserve [Top L] as if a happy family is joined at the lip. They might reflect on Ecclesiastes ch10v16 "Woe to thee, O land, when thy king is a child". The actual family whose idealised image was used by the No-people, turned out to be decisively Yes-people and had a new image [Top R] generated in the same colours as the original.  The message is opposite and the relationship looks healthier - they are all looking in the same direction and the child is getting only 1/3 of the attention. [Below L] is another take on the colour-scheme, privileging food and love above the precise quota of the adults in the household: "children deserve a decent meal and loving parents: gay or straight" And you have to love the angry multilayer of the last message [Below R]: you can't think of a better reason to vote No than that you have no time for Elton John. It's the sort of logic that comes down the hot-line from heaven to announce that God says No. Here is a useful archive of election literature on the Mar-Ref which also hosts a backlog from Ireland's previous trots into democracy.
There was a huge response from the Irish diaspora, with people loading themselves on trains, planes and boats to come home to vote because they wanted to be part of a movement. It was caught and displayed on a twitter trendmap illustrating the number of people on their way home. I can't get a figure on the actual numbers of vote-eligible returnees that is higher than 60,000, about the same as the number of new voters like Dau.II on the supplemental register.  Those groups together wouldn't have made a difference to the result, but it makes a fine story about what people will do for issues they care about. And I think a great many people were affected [using the word unmanned in this context is a little edgy?] by the door-step campaign of Ross Golden-Bannon so that no child, no teen, would have to go through the misery he experienced growing up gay in Ould Ireland. Read it if you haven't done so already - it is painful but redemptive.

That same Dau.II will be leaving her teenage years behind this September two years after leaving home to become a tax-paying, financially independent citizen working in the catering trade.  She got herself on the register, got all her pals on the register and got her ass down to City Hall on Friday at 0700hrs to vote before opening up the restaurant for first shift.  On the way across town to work, she encountered a group of three Yes campaigners handing out leaflets and urging folks to vote Yes. Dau.II pointed to her Tá badge and said "I gave already".  They were just delighted [if tears weren't shed at least lips trembled] to see their hopes and hard work canvassing in the drizzle for weeks vindicated by this democratic first-timer carrying a sunnier and warmer future in her hands so early in the day.  When she told me this story I said "You must have made their day", but she replied "The Day made our day". 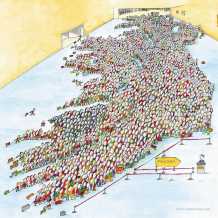 The Beloved is still wearing her Tá and her Yes badge and was very taken with the cartoon by Annie West [L] of the diaspora coming home to vote. Then she heard that it was available in a limited edition, with the proceeds going to support SpunOut, a group with a brief to listen to and empower the 16-25 youth.  I've tribbed SpunOut before for their direct and accessible approach to talking about sexually-transmitted diseases. ANNyway, TB ordered up a copy of the print and it arrived on Thursday last with a limited edition authentication number of 51/1,201,606.  They are clearly anticipating that all the Yes voters will want a copy!

In 1990, in the wake of Italia '90, Ireland elected their first ever female President, Mary Robinson, who was not only a woman but also a well-known civil rights activist who had campaigned for birth-control and defended David Norris in the European Court of Human Rights in an action that led to the decriminalisation of homosexual acts. After 7 years of that Mary, the people elected Mary McAleese, another Constitutional lawyer who was also qualified in Canon Law, and who goes along with the legalistic details of church doctrine to be clearly against abortion and divorce. But bucking the temptation to pop her into the Catholic Right bin, it turns out that she is a founder member of the Campaign for Homosexual Law Reform. Here she talks, briefly, about her position on Marriage Equality - driven by her long embrace of gay people and their rights . . . but also by the fact that her son came out at the age of 21 after a decade of painful soul-searching.  Here she is talking at greater length to the BLT youth group BelongTo. And for balance, here is Breda O'Brien, [home-educator, catholic apologist, Panti-basher, Irish Times columnist and prominent talking head for the No campaign] pointing out that to have McAleese speaking out on either side of a Constitutional Referendum was, if not a constitutional crisis, at least counter to convention among ex-Presidents. Fairy nuff, but then she segues seamlessly into her comfort zone of casting up lurid and irrelevant images about the consequences of marriage equality for surrogacy and the future [probably bad] of gay children raised without a mother AND a father. Of all the images cast up by marriage equality, we now have to find head-room for an Irish girl lost in Copenhagen looking for a Danish sperm-donor to complete her family - thanks a bunch, Breda, but that's just weird.

This is standard propaganda from her Rückschrittlichgruppe the Iona Institute. They have a handy cartoon to help simple ordinary people get to grips with the key issues. This was mercilessly . . . pilloried by Tara Flynn. I dunno, mate, but if having a mother is so important for child development (another theme in the Noes heads) how much better to have two mums?!
It turns out that, in the end, even Hitler voted Yes.

Anyway, it's all over - even the post-result shouting "fix!" has died down - a week has passed and the sky hasn't fallen.

Posted by BobTheScientist at 06:27