Vaccinium myrtillus is a shrub with edible purple fruit [L: yes, the fruit are that sparce] commonly called blueberry blåbär bilberry melleņu mustikka myrtille wimberry borówka whortleberry Heidelbeere or fraochán. Hereabouts on the last Sunday of July, families would head off to the hills for Fraochán Sunday. In the war years, these little berries acquired a monetary value because the Baltic was closed to civilian traffic, yet there was still a market for blueberries in London. Wholesalers would bring a van across on the Fishguard Rosslare ferry, drive to agreed mountainy cross-roads and give ready money for each punnet of berries. Folding money was extremely hard to come by in the closed economy of deepest rural Ireland. Labour was exchanged rather than bought; people grew their own beans, spuds and cabbage; fattened a pig on the stalks and peelings; those with a little more money would have a cow for butter and milk and a calf to sell for cash.

I guess the habit of picking fraocháns stuck even when the van stopped coming. The effects of vitamin C deficiency were known by the late 1700s and James Lind recommended a supply of fresh fruit or fruit juice for the British navy in 1795. Limes were more readily available from British colonies in the Caribbean than Spanish oranges, so this fruit became the official preventative against scurvy. Dealing with a gross deficiency is not the same as recognising the benefits of enough vitamin C for ordinary people who had access to cabbage and spuds. It wasn't until 1930 that ascorbic acid was isolated, purified and identified by Albert Szent-Györgyi as the effective anti-scorbutic molecule. Nobody has picked fruit without stuffing at least some in the mouth. When the fraocháns couldn't be sold, they could still be eaten, and only a rare child came to harm from scarfing down too many. Occasionally, Fraochán Sunday coincided with one of those rare days in an Irish Summer when the sun shone and everyone would troop off to the hillside for the day.

A day-trip required sandwiches, or at least cold boiled potatoes, and tea: the colour of tomato soup and strong enough to trot a mouse on. Thermos flasks were for the gentry and who likes old tea when the hills are alive with the sound of water and dead heather makes a fine quick fire. I'm sure that some girls drifted off from their younger siblings and <surprise> encountered their bloke over a shoulder of hill where they could have some privacy. 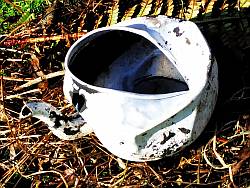 Well I'm sorry to say that, on such a Sunday, years ago in the Blackstairs, someone forgot the tea-pot. Or rather, I am sure somebody was blamed for forgetting the tea-pot but really everyone had the benefit of the beverage that warms but does not inebriate so everyone was responsible for leaving it on the hillside. I'm also sure that the tea-pot wasn't just abandonned as lost. Several children were sent up the hill again [and maybe again, poor weans] to scour the heather for the missing utensil. But it was never found. The family are quite likely still telling the story of how, now matronly, Auntie Sorcha lost the family tea-pot when she was as tall as you are now, M'cushla. Sometime later a sheep or a cow stepped on it and some time after that the rivets eroded through and the handle fell off. I know all this because, like a metal-detectorist finding a wedding-ring on a beach, I turned up a partly crushed handleless aluminium tea-pot [R above] when I was coursing about the hillside BoPeeping for our sheep. It was entirely random that I discovered it half-buried in the turf under a thatch of heather. It would have been the divil of a task to locate it if I had been anxiously looking! I never did find the sheep though. That required the help of two sets of neighbours Effectives from adjacent townlands.