Paternity and the patriarchy 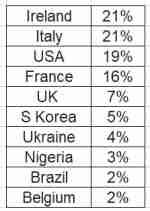 IF you're reading this from Abroad [which is likely given The Blob's readership stats R], OR you are our Taoiseach Leo Varadkar, OR you've lived all your life under a stone THEN you may not have heard of the Kerry Babies case which shook the nation in the 1980s. At about the same time, in another part of the country, Ann Lovett and her neonatal child died in the drizzle near Granard. For me, the fact that the head of the current government should admit to ignorance about such a watershed in Irish social development is worrying. George Santayana said "Those who cannot remember the past are condemned to repeat it." which is entirely on the button because a key element of the Kerry Babies was a stitch-up by investigating Gardai, which led to a Tribunal which failed to put the stitchers back in their box, let alone behind bars. Right now we are taking a long time to not find anyone to blame for the stitch-up of Garda whistle-blower Maurice McCabe. The Blob carried the McCabe story in April 2014: that is four years ago and we're still rumbling along looking pointedly in the wrong direction.

The Kerry Babies boiled to the surface this week because someone decided to look at the DNA evidence . . . 34 years after the necessary tissue samples were gathered. That showed conclusively that Joanne Hayes, despite confessing to his murder in elaborate detail, was not the mother - not even a close relative - of Baby John whose body was washed up on a beach near Caherciveen. Sufficient details of the events in Kerry in 1984 can be found in The Indo.  Indeed even back in 1984, the dogs in the street knew that Joanne Hayes could not have been the mother of Baby John because he was blood group A but Ms Hayes, her own dead baby and the baby's father were all blood group O. I think we can be sure that if Baby John had also been blood group O, then Joanne Hayes and/or members of her immediate family would have been convicted and imprisoned and the relevant Gardai would have been congratulated on a brisk and efficient investigation. 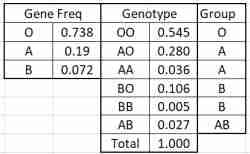 How likely was that? How close did an innocent woman come to being banged up in chokey in a stitch-up that required so many bizarre and unlikely events to be true. Let's look at the numbers. If you have no idea how ABO blood groups work, I refer you to my tutorial on the genetics. Today's investigation is about probability and gene frequencies which I've looted from George Dawson's famous survey of Irish blood groups from the 1950s, which I've cited before. Each of us has two copies of the ABO gene - one from The Mammy and one from The Dad. If you tally up a bunch of them as A, B or O and divide by the total number of genes counted, then you can calculate the frequency of each variety in Ireland [see chart L]. You can see that blood group B at 7% was very rare in 1955 and also in 1984 a generation later. It's a bit higher now insofar as we've welcomed people from *istan and the PRC where this variant is much more common [see map in my prev cited tutorial]. To be blood group O you must have inherited O genes from both parents. But there are two ways you can be B - either with one B gene or with two - pedantically but necessarily for the maths to work there are really 3 ways you can be B - BB, BO or OB. Similar arguments apply to those who are blood A. Finally you are group AB if you get A from The Mammy and B from The Dad = AB or the other way round BA. This is no discernable difference between the two cases except their history.

Many people get a bit confused about the gene frequency and the frequency of the blood groups. It's mostly because manifestation of a particular blood group - called the phenotype - depends on the presence of two variants of the ABO genes. You can verify from the table above that the chance of being blood group O depends on independently acquiring two copies of the O gene:

0.738 x 0.738 = 0.545
So that's how close Joanne Hayes got to being convicted. All other things being equal, 54.5% of Irish people, including murdered neonates, are going to be blood group O. It's like Fortuna tossed a coin and it came down heads-for-exoneration rather than tails-for conviction. Phew!

Well, at that stage I got an attack of the datas and put together a comprehensive study of ABO blood groups as they impinge on paternity testing. Apart from the odd cock-up with wrist-bands in maternity hospitals we know who is the mother. The following tables and charts are based on the frequencies found in Ireland, the conclusions will be slightly different if you come from elsewhere in Europe and quite a bit different if you're tracking Aztecs or Han Chinese. First lets look at when a man and a women love each other very much . . . and have a child. We can calculate how many of each sort of mother-father-child triplets we can expect. The numbers in the coloured part of the table are the product of the frequencies along the table margins: 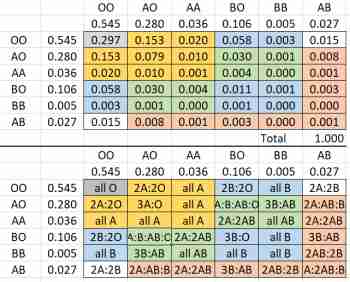 There are six possible 'genotypes'. As far as we know - and it has been investigated - there is no assortative mating: you choose your partner because s/he wears the same sort of shoes as your mother or because s/he smells like your Uncle Jim; not because s/he has the same (or different) blood group as you. From the top part of the table above note that in 0.297 (just under 30%) of all 'marriages' in Ireland both parents are blood group O. otoh, only 0.001 (or 1-in-1000) involved two people who are both AB.  The bottom part of the table imagines that there are 4 children to each liaison and lists out their blood groups. Of course, it doesn't work out with strict determinism: all the kids of Mr AB and Ms AB could be AB . . . or A . . . or B - or any combination. But the probability is as outlined in the chart. Some interesting outcomes

We can summarise the Exclusions [chart L] as those children who cannot be the offspring of the declared parents. You may choose to suspect the golf Pro or Mellors the garrrrdener. I've had some thoughts about non-paternity in a case, much more recent than 1984, where the gardai and society-in-general were jumping to conclusions about people who lived a bit outside of a rather narrow definition of normal. 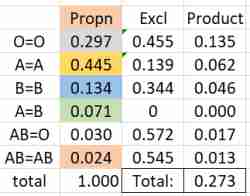 And because I am nerdy like that I have put down [Table L] each combination of parents and the proportion they comprise of the population: from the colour coded blocks in the third table above. My codes for combination are short-hand: A=A also includes A=O cases where one parent is group O - the orange colour really means parents who cannot have a child who is B or AB etc.  I've then cross-referenced the Exclusion table to tally up the expected proportion of people in the Irish population who have the attributes which are excluded by that combination of parents. The bottom right cell = 0.273 = 25%. It's reciprocal of that number which is important: 75% of the time ABO blood groups will,  on their own, have no utility to exclude paternity. YMMV in Kazakhstan but not by much: as group B gets more common in Asia so group A frequencies fall. This is why the Kerry DNA data is so important; by looking at dozens of different independent variants it becomes vanishingly unlikely that you'll make a wrong call on who the parents are.