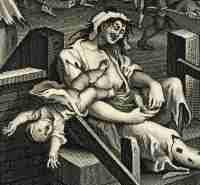 Picture left is a zoom from Gin Lane a famous print by Hogarth. It shows a mother so smashed with Dutch courage that, in scrabbling in her snuff box for more drugs, she allows her infant to fall out of her arms and onto its head. Mother's Ruin is cockney rhyming slang for gin. I didn't realise that the print was paired with another called Beer Street where honest English yeomen are quaffing pints of healthy English ale . . . so different from imported Hollandish gin. Hogarth was of the same mind about beer as William Cobbett who preferred beer to tea: another unpatriotic import. We think we've come along way since 1751 and that nobody now would dream of quieting a noisy baby by using alcohol as a soporific. hmmmmm?

I was drawn to think about this issue last week because I was in the pharmacist. I was in the pharmacist because my neighbour across the valley called me at work to say that she and her husband were poleaxed by the Australian 'flu and good for nothing but the bed.
Could I pick up a couple of packets of  Lemsip  with the turbo-charge of paracetamol on board?
I could!
It was bit of a rush because I was just about to leave the office, late, and I was 20 minutes from the four (4!) pharmacies in Bagenalstown [pop. 3,000] which closed in 25 minutes. Nevertheless, I barrelled in through the door of Nolan's before they were shuttered and asked for the 1000mg paracetamol  Lemsip .

Which allowed me to reminisce about being part of the Dublin-London shuttle in the early 1990s. Dozol is marketed €5.95/bottle as a pain-killer - contains paracetamol and the anti-histamine diphenhydramine but the name and the packaging [see L for child seeing stars] tells parents that it is a really effective knock-out drop.  Half of The Beloved's family were then living in England, so anyone flying in either direction would be requested-and-required to take a black bin bag full of children's clothes as checked baggage. Everyone was breeding and the nice Mothercare micro-dungarees would be outgrown, get shipped to Ireland for the next smallest cousin and then shipped back and then returned. The end of the 1990s coincided with a slackening of the rate of child-birth, (and, of course, 9/11) and the traffic in kid's clothing also dried up. One time, the day before my departure to Stansted, I got a call from London to go buy six bottles of Dozol and bring them across the water so that the family could get some sleep. The stuff wasn't on sale in England.

I went round to the Pharmacy by the back-gate of Trinity College Dublin and asked for six (6!) bottles of Dozol. Well, the pharmacist had a fit and lectured me strong about how dangerous the stuff was: Six bottles is a LOT of Dozol. Telling him that the load was for export to England put an abrupt stop to his gab - he was quite happy to take my money if it was British kids that I was going to do to death. Really folks, don't do this at home. Dozol replaced Woodward's Gripe Water in the years after WWII despite the latter being a very effective soother of colicky or teething childer. Gripe water contained sodium bicarbonate and dill Anethum graveolens and . . . 4% alcohol! It was a lot more expensive than gin and thrifty mothers soon saw through the marketing and just put a tot of gin the baby's bottle - vodka would do nicely as well.  There is nothing so wearing as the sleep deficit caused by a continually crying baby.
Posted by BobTheScientist at 07:48