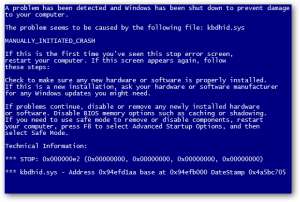 If it hasn't happened to you, then you don't use your computer enough. When I started at The Institute, my office-mate said she never switched her desktop off, because it took so long to boot in the morning. You can take this sort of inconvenience on the chin . . . and grizzle about it. I did this for a couple of years.  It was okay, so long as you didn't need to print something in a hurry for a 9 o'clock class.  Then, I mentioned it to our IT guy and he said "Oh you don't have enough RAM, I'll double it for you" - and it was so - about 2 hours later. Often, the solution is to push at an open door: pissin' and moanin' rarely achieves anything, while a polite request might.  Now I can be super virtuous and switch the computer off every night and be confident that she'd boot up sharpish in the morning.

One morning this last week, the first of the teaching term, both the chaps in the office next door came into work to see the Blue Screen of Death awaiting them. I advised them to "Switch it off and switch it on again" but they'd been there before me. I had a busy day but later on saw the IT guy swapping hard-drives and sorting the problems out. He suspected it was a "rogue update from Windows" which made me think the same disaster would happen to me if I tried "Switch it off and switch it on again". The prospect of losing files made me feel queasy and weak at the knees. The worst aspect of it is not knowing which version of a file you're dealing with among the backups: it's almost better if something is gone-gone and you just knuckle down and recreate it.

One of the last things I did before Christmas was set and mark a computer exam. I could find the damned exams but not the marks. I could also find an e-mail with an anonymised set of marks which I'd used to show the students that some questions had been better answered than others. But that was a long time beyond my two-week event horizon. I exhausted a frustrating hour trying to track the marks down on my Desktop at work and through my December e-mails. Then it dawned on me that I'd marked the exams At Home; on the weekend before Christmas; when I should have been decorating the tree or making more mince-pies [instead of shop-bought].  I hoped so aNNyway, because the laptop was 40km away and not immediately available. The thought of having re-mark the exams filled me with dread. But that evening, it all turned out okay - pheww! - because the marks were indeed on my laptop.

The Blue Screen of Death event next door caused me more anxiety than was strictly appropriate because I knew I hadn't backed-up my work Desktop for weeks and it would be exceedingly wearing to try to sort out a restored hard-drive. Therefore I nipped across town to buy another portable hard-drive to capture the data and files before anyone [like me, for example] tried "Switch it off and switch it on again" and it didn't work.  The last time I bought such a thing from the same electronics megastore - 2+ years ago - a 500GB drive cost me €70. This week a 1,000GB = 1 TB drive cost €70. 1TB is now the bottom of the available range. I could have bought >!bargain!< a 4TB drive for only €130. But I knew that would have been silly because 1TB is wide-open prairies of space. I loaded my precious workfiles onto my new electronic fashion accessory [it's a fetching red to complement my canary yellow button-phone] and 5 years' work filled a mere whisker [see R] of the available storage. I guess it would be different if I took loads of photos. Take my advice: backup early and backup often - you'll sleep better. 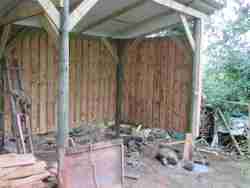 My souvenir 2400 ft magnetic tape from 25 years ago is about the size of a rather fat 12 inch vinyl LP with a physical volume of about 1500 cu.cm; and a data capacity of about 200 MB. 7 cc for each megabyte.  The Terabyte drive takes up about 100 cu.cm. Now you only need 0.0001 cu.cm for each megabyte. That's a 70,000x increase in efficiency! To put it another way, if were still dependent on mag tapes, my terabyte of crap photos, ripped films and viral fail videos would require a space like our substantial woodshed [R] to store it all. If that's what it cost maybe we'd be more ruthless with the editting.
Posted by BobTheScientist at 07:46