Nobody would call me an Early Adopter. I was the last person in Ireland to purchase a slide-rule, just as they were made obsolete by pocket calculators. It takes me ages to start going with the flow and getting with the programme. In the early 1990s we were writing DNA sequence analysis software in Fortran, which I'd first learned in college in 1974. Like Dr Johnson's dog walking on its hind legs, it was not done well but it was amazing that we could do it at all with a language that was essentially mathematical rather that build for string processing. When I was back writing original sequence analysis software in the very early 2000s, everyone in the room was using Perl, so I learned that. By the time I learn Python, everyone will have moved on to the next best thing. 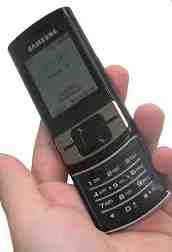 We moved down the country in 1997, while I was still working in Dublin. On Fridays, I'd get on the bus and The Beloved would pick me up from the nearest bus-stop which was an inconvenient 20km distant. We knew the bus would be late, but not how late, so set the pick-up time for eta+25minutes. One summer evening the bus was an hour and 25 minutes late, and by the time it pulled into Gowran, the girls had divested themselves of all their clothes and were running starkers round the ruins of the abbey. It never occurred to me to buy a mobile phone. Even when I went on my long walk through Spain in 2004, I would call home from a call-box every 2 or 3 days. I didn't have a camera either - too much weight. Then the logistics of meeting buses got too-too much and I bought a Siemens C35 in about 2006. Actually I think the phone was free if I contracted for a year with Vodafone. It was magic, I could call - or txt - from Castledermatitis which was exactly the same time from rendezvous as what it took to pile two small children into a car and set off from home. That was all I used the phone for. About a year later, I went back to the shop and said the battery wouldn't charge anymore, so they gave me a new one . . . for €5 because I was a loyal customer. A year after that, the same thing happened but the C35 was now definitively obsolete and batteries were no longer available.  But, the spotty youth in the Vodafone shop looked up my records and said that as I'd been with the company for 2+ years they would upgrade my phone to a Samsung C3050 for free [above L]. That must have been in early 2009. 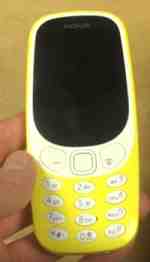 Eight and a half years later my trusty and under-used C3050 was down to a battery life of about 25 minutes and I went looking for a replacement which would last me another 10 years. All the phone-shops in town had the New retro-chic Nokia 3310 [R], the original of which was launched in 2000 the same year as my Siemens C35. A young woman in the shop said that the 3310 was The Biz because you could drop in from a great height and she'd bought one for a pop festival that Summer. At €50 it didn't strike me as being a throw-away phone but was clearly cheaper and more robust than the latest iPhone. I said I'd have one in canary yellow [L]; but she said they had none in stock; and I said I'd wait. I didn't want to buy a cheaper phone by Doro or Alcatel - never 'eard of them. Only a yellow 3310 would satisfy me. It was about 3 months later when the flow of 3310 into a demanding market finally coincided with one of us being a phone-shop. In the run-up to Christmas it was marked down to €39.95 so it was worth the wait.

I must be the last person in Ireland to upgrade to a button phone for primary use.
Posted by BobTheScientist at 07:30