An Apgar assessment is carried out on all babies who are born in the presence of a competent midwife, usually one minute and 5 minutes after delivery. It is a ready reckoner to focus the midwife / obstetrician on potential problem cases before they move on to the next customer in the baby-factory. It's one of those terms that I'd heard about but couldn't really remember where and definitely couldn't define. It made an appearance in Thinking Fast and Slow my current read, where Kahneman is differentiating between expertise vs an algorithm that can be used by one and all. Algorithms ensure uniformity of care but almost always ensure better outcomes. I've cited a case where a doctor [expert] doesn't believe in checklists [algorithm]. Because doctors make a living from saving lives, some of them inch towards a can-do-no-wrong mindset and they fail to take account of all the data. The eternal sunshine and optimism of their demeanour is a key element in theit effectiveness, so we shouldn't take it away from them. But Doc, could you also embrace the evidence? I've had rather a lot to say about medical certainty and its bad-fairy flip-side medical error. 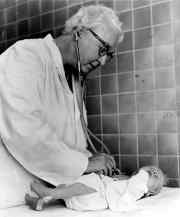 APGAR, especially in CAPS, looks like an acronym but it is really the invention of Virginia Apgar [L doing the biz on an infant or at least looking like that for the photographer] an anaesthetist, who in 1953 at breakfast in the hospital canteen was asked by a colleague how she would / did assess the health of a newborn. That's easy, she said, and jotted down 5 key parameters each on a 0, 1, 2 scale. Years of experience in maternity wards had embedded the factors but writing them down was an epiphany. Especially for those who had less experience or were far too strong on reflexes and ignored cyanosis. Because they needed to be memorable, her notes were shoe-horned into a backronym. Some cross-word genius has managed to get five relevant words in German that spell APGAR as well albeit in a different order:
The words in, say, Portuguese - Aparência, Pulso, Gesticulação, Atividade, Respiração - show how much of our [English] medical terminology comes through Latin. I've indicated how little filters into Polish.
Irish maternity hospitals have a long and strong tradition of active management of labour which ensures that the outcome 'mother and baby well' is among the highest in the World. If we take on board other outcomes like "demeaning, invasive interventions" "lack of continuity in the caring staff" "lack of options in delivery method" "high levels of Caesarian section" then the verdict is not so good. When The Boy was born in 1975 it was a very busy day for everyone involved. I spent about six hours on the buses of Dublin putting external things in place. Herself was getting denuded down there for no good reason and the obstetrician was poised with the knife helping things along with a bit of episiotomy to keep things on schedule. Nobody asked her about either of these things and she came out of the hospital delighted with her new status and, of course, The Boy but vowing never, ever to go back to a maternity hospital. That's what I mean: mother-and-baby-well = yes; severely pissed off customer = also yes. 18 years later, Dau.I was on the way and everyone assured us that things had improved immeasurably over the intervening two decades but a maternity ward delivery wasn't going to happen. We'd grown up as well and had travelled and knew that there were other options. We signed on with a domicilary mid-wife, one of the very few that was licensed to practice in the country who lived about 5km from the draughty, chilly, romantic 19thC farmhouse that we inhabited out near Dublin Airport.

Well, the whole experience was a blessing, a healing antidote to the humiliations of 1975. Kate-the-Midwife came a couple of times before-hand and was there for the delivery (of course) and fixed us all a cup of tea and then she went home for some sleep. But she came back in the afternoon to see if there was anything else she could do. And she came back every day for the next ten days. She was super-vehement that post-partum maternal bed-rest was important. As she explained, the uterus gets enormously bigger to accommodate the 3kg package with which it forms a mutually supportive structure. After delivery, the supports are limited to two small ligaments well designed for normal un-pregnant uterus, but a little under-engineered for the heavily vascularised model. The worst thing to do, said Kate, was vacuuming. The rhythmic motion could entrain the uterus [resonance] and might cause it to break loose from its moorings.

Mais revenons nous à nos agneaux Apgars. The Apgar score goes from 0 to 10 and anything 3 or less is a cause for concern. A perfect 10 is rarely achieved because transitory peripheral cyanosis is quite common in neonates as the heart and heretofore unused lungs take over the full responsibility for delivering oxygen and glucose to the most distant cells in the body. Thus many babies get a 9 at 1 minute but 10 at the 5 minute checkpoint. A decade after she launched the Apgar scoring system on maternity wards across the globe, the 1964-65 pandemic of rubella [German measles to anglophones] occurred. There were 12 million cases in the US alone, resulting in 11,000 premature terminations and 20,000 cases of CRS congenital rubella syndrome = 2,000 neonatal deaths, 12,000 deaf, 4,000 blind and 2,000 with mental handicap. Dr Apgar went on the stump across the the length and breadth of the country advocating universal vaccination to prevent that sort of thing ever happening again. She wasn't alone in her crusade, and 'universal' MMR vaccination was rolled out in the USA by 1969.
Q. Number of rubella cases last year in the US?
A. Ten. not 10 million.
If you are of the anti-vaxxer persuasion you might reflect on the numbers.

Apgar was also at the fore-front of getting rhesus blood tests done in all maternity hospitals, so that there would be no more cases of haemolytic disease of the foetus and newborn (HDFN) where the red blood cells of the newborn have been destroyed by rhesus incompatability with the mother. The Irish Blood Transfusion Board fucked up that intervention later on but we can hardly blame Dr Apgar for the complacent idiots who came after her. Later still she targetted premature babies with the slogan "Health Babies are Worth the Wait". She gave 25 years of her life to the March of Dimes becoming tireless in her advocacy for the health of mothers and babies.

Bonnets off!
More women in Science.
Posted by BobTheScientist at 07:35