A while ago, I was reporting that life goes on in parallel to the unfolding pandemonium. Life including normal accidents where older people do a trivial trip & fall and end up with broken bones. Time was when every parish would have a bone-setter who would make some sort of a fist of applying a bit of traction, guiding the busted ends back into interlock, applying a supporting splint, and advising - you leave that be for 6 weeks. This person was not usually the same as the midwife; different skills, different traditions, different problems indeed. But like flint-knapping, scything, and divination these professions have fallen into the dustbin of history and become medicalised, legalised and regularised. I suppose this is A Good Thing. But I'm really glad Dau.I and Dau.II were handed into the world in the bedroom upstairs by Kate "Superwoman" Spillane domiciliary midwife. And it's a prolonged pain in the wrist to have to schlepp off to a distant hospital and share spittle with a miscellany of injured parties when Old Seán from round the hill could set a clean broken wrist in 15 minutes including a cup of tea.

Whatevs, my pals D&C set off with C's fractured radius for Ard Keen as we persist in calling Waterford University Hospital. Once arrived, C was many hours inside A&E, D was the same time outside in the car. A diagnosis was eventually made that a pin was required [a remedy which was never in the tool-kit of Old Seán let it be said]. That surgical intervention required a night in hospital and four trips between hospital and home. They were paused by the Gardai six times!  I was busy during Friday being The Outdoor Man mow mow dig dig pot pot chop chop water water, so it wasn't till the evening that I caught a txt from the injured party asking if I knew anyone with a lawn-mower because theirs was banjaxed. It's the grass-sprouting time of year when things can get totally out of hand if you leave it too long. Therefore my txt-bak: I'll come tomo middle day if dry; mow mow mow. And it was so: 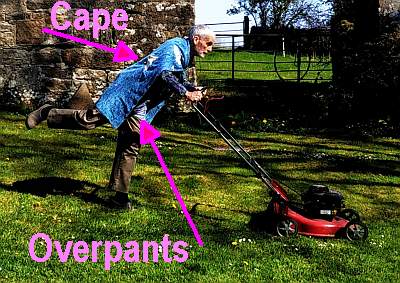 It's the kind of ordinary neighbourly chore that is nowadays #capefreeheroes being treated as the action of a superhero rather than just what folks do for each other. Lest there be any doubt about just how effin' bri'nt I was, I found a telephone booth to get togged up with my mowerman cape and shift me undies to ovies. Watch 'im go! Is it a berk? is it inane? no it's looperman.  Mowing a cocoonees grass is really not a legitimate excuse for breaking curfew but I have no regrets.

When The Institute was abruptly closed a month ago and everyone was bundled off the campus, I Copied my live folders from the works desktop and shut up shop. In the rush, I left my attendance and marks register on my desk, thinking I'd pick the book up later. Now my colleagues are calling for those marks for all the lab sections for which I've been responsible this last year. I decided to drive into work and pick it up and do some food shopping on the way home. I was told that I'd need a letter of authorisation from my line-manager's manager or I'd be refused access to the campus. This took a couple of hours to sort out so I didn't get to work until nearly lunchtime. The campus was distinctly tumbleweed and so few cars were on the lot that they could do social distancing:

That was the first time I've been on Campus for a month and I saw precisely 5 co-workers, to 2 of whom I spoke. I've almost forgotten how to drive. Drive? By "working from home" for nearly 5 weeks and not doing a round trip commute of 80km, I've reduced my driver's carbon footprint by 160kg and saved myself €120! On the way home I stopped to buy some food. As it was the last time I was likely to drive for at least 2 weeks, I converted the €120 into six-packs. It's Hammer Time!
Posted by BobTheScientist at 07:31