Nobody would call me an athlete.  When I were a lad, I had to walk for a bit when halfway through any 800m race because I was seriously out of puff and could never be bothered to look for this second wind that sporty-types talked about.  I deplore how hard it is to find anything on the Irish wireless on Saturday or Sunday afternoons that isn't sports.  This obsession with competitive games worries me in its congruence with the chariot races of The Decline and Fall of the Roman Empire.  And yet . . . and yet . . . if Leni Riefenstahl's great propaganda film Triumph des Willens had been about the 1936 Berlin Olympics rather than the 1934 Nuremberg Rally, it would say all there was to say about great athletics in those three words - five in English: The Triumph of the Will.  In that line there's nothing for me that can beat Emil Zatopek. 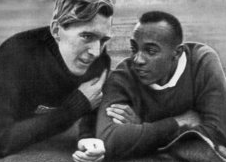 In Berlin on this day in 1936 Jesse ( that's James Cleveland) Owens won his second Gold medal for Long Jump.  He'd won the 100m the day before and would win the 200m the day after.  He was having trouble in the heats for the long jump and fluffed his first two tries by trying too hard and putting his launching toe over the line to disqualify each attempt.  The local boy from Leipzig and European champion Luz Long  knew that Owens was well able to manage a qualifying jump and quietly advised his rival to ignore the inches and jump well back from the foul-line.  Owens was visibly more relaxed on his final jump and easily made it into the finals that afternoon, which he won.  Luz Long took silver and, sportsman that he was, became the first to give Owens a congratulatory hug before they walked off the field arm-in-arm, which earned him a reprimand from Nazi goon/loon/buffoon (your choice) Rudolf Hess. There is skepticism about the advice anecdote but the hug and the departure to the dressing-rooms are on film, as is the shot seen here of the two young men relaxing between events. Their fates diverged after Berlin.

It is fairly clear that President Franklin Roosevelt avoided (being seen) shaking hands with Owens on his return to the US - it was an election year and FDR was counting on white Southern Democrats to vote for him.  It is much less clear that Hitler went out of his way to give the athletic god the same treatment.  It is almost certainly true that Owens rode a freight elevator to his own reception at the Waldorf -Astoria hotel in New York because blacks were not allowed in the gilt-plush front-of-house elevators.  And it is a matter of record that Owens spent the next 30 years struggling to make a living ". . . you can't eat four gold medals" filing for bankruptcy in 1939 and being prosecuted for tax-evasion in 1966.  Shortly after that, as sport started to replace religion as "the opium of the people", he got more recognition and was, for example, hired by the US State Department to tour Asia as a goodwill ambassador. He died in 1980, aged 67, from small-cell carcinoma of the lung almost certainly helped into that state by smoking 20 cigarettes a day for 35 years.  Richard Doll would have advised him not to do that.

And Luz Long?  A qualified lawyer with a bright future, he was drafted into the Wehrmacht at the outbreak of WWII and was killed-in-action in July 1943 when the Allies invaded Sicily.  "quem di diligunt, adulescens moritur".  Coincidentally, a week later, Charlie Paddock (USA - 100m Olympic Gold 1920 but no medal (placed 5th) for 100m four years later in Chariots of Fire) was killed in a military plane crash near Sitka, Alaska.
Posted by BobTheScientist at 06:36