IF you hug trees ANDIF you haven't read The Man Who Planted Trees THEN you're missing a trick! That link will lead you to a PDF of the original essay. That books is more about the ecological, climatic and spirit-of-place changes that A Lot of trees wreaks on the landscape. If you're a sitter-on-sofa philosophical tree-hugger that might be enough. But if you have planted an acre of trees then you might reflect more on the uses to which those trees can be put. The delightful thing is that not all trees are the same: each species will have characteristic properties ultimately stemming from the way the cells are laid down and stuck together. Some trees split well because they are made of long parallel fibres: split sweet chestnut Castanea sativa makes excellent paling fences. Elm Ulmus procera otoh has densely interlocking grain which is the divil to split but therefore makes excellent wheel hubs. 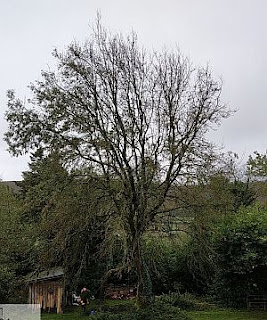 The Man Who Made Things Out of Trees by Rob Penn [Grauniad review] is a hymn to Fraxinus excelsior, the common ash. The title is probably a conscious hat-tip to Jean Giono's essay about planting them. But actually it's the two year story of how he made things out of A tree: a majestic, well-proportioned specimen  in Callow Hill Wood, halfway between Hereford and Abergavenny, which it took him weeks of networking and walking through wet woods to identify,  fell, dismember and haul out for distribution to numerous crafts-people. They collectively, under his supervision, and often with his participation both reduced and improved their billets into artifacts. And, as a libation to the dryads of the woods, piles of brash and saw-dust were left behind as habitat for small vertebrates and food for fungus and ultimately as goodness for another generation of trees. I don't have a picture of Rob's tree so I took one [L] of my ash tree which was growing out of a wall at the bottom of the yard when we bought the house 24 years ago.

It was quite a bit smaller then, of course. But so much Just There that nobody made a point of taking a picture. For scale, the dwarfed woodshed below-left is 3.25m tall. Ash, like sweet chestnut tends to beautiful straight, parallel grain. Another attribute is that ash-trees are deep-rooted hunters after water and nutrients. So they never fall over . . . but they do tend to lose branches in high-winds and we try to remember not to park underneath when storms are forecast.

Rob's tree was taken apart the way Native North Americans used every part of the buffalo which they killed; or pork butchers use everything but the squeal. In the last chapter, he inventories, counting each spoon, all the goods and good things which came out of his tree: arrows; axe-handles; benches; bicycle!; bookmarks; bowls; canoe paddle; catapaults; chopping boards; coffee-table; coracle; cricket-stumps; desk; dominos; felloes; fuel; landing nets; milking stools; panelling; pen; shop-counter; spatulas; spoons; surfboards; tables; tent pegs; toboggan . . . There's a chapter on making baseball bats and another on making hurls because that's part of ash's journey in the service of humanity.

It's a lovely book, personal and passionate.