Tim Harford [prev] writes for the Financial Times and hosts the More or Less podcast through the BBC. I found a copy of his Undercover Economist and arranged for https://www.kennys.ie/ the amazon-free outlet in Galway to ship it to Dau.II in Cork for her bday last month.  We are both partial to the More-or-Less podcasts, which often hinge on a listener's query like "I've been told there are more beetles in a mole's stomach than there are islands in the Orkneys; can this be true?" The answer necessarily involes a shrewd amount of defining of terms "before or after breakfast? how big is an island? islandSwitha beach? which species of mole? does the tide mratter? You can spin out pretty much any topic to 15-20 minutes if you ask some experts to free-associate and let them off down a rabbit-hole.  After a while you can echo Oscar Wilde with "b'god Harford, I wish I thought like that" and the answer comes back "you do already" but everyone can always devote time to polishing their crap-detector.

Whatevs! Tim Harford reads really easily and economics is surprisingly interesting. This is partly because Economics is surprisingly everything as anyone who has heard Steve Levitt [car-seats, bad] or Steven J Dubner [artificial insemination in turkeys vs chickens] talk; or read their first book Freakonomics will appreciate. Harford is a big believer in market forces: if we leave everything to them, then prices will equilibrate where both the seller and buyer feel that they've gotten a good deal. His position is that, if politicians put their oar in with tariffs or taxes [or regulation? health&safety??] against the flow of the market, then it is inefficient. Which means that somebody ends up paying too much as special interests get preferential treatment. Thomas Carlyle (1795-1881) called economics the dismal science but Harford [and Levitt and Dubner] make it rather jolly and edutaining. 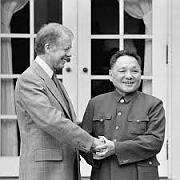 The last chapter in Harford's book is about how China was transformed from a centralized, cultist, communist crazy-state into the global economic powerhouse which is now scaring the bejabers out of Western capitalist democracies. It was largely due to Deng Xiaoping [L.R. with US President Jimmy Carter L.L.] who was an early adherent of Communism - he was Mayor of Chongqing [prev] 1949-1953 - but twice purged from the central praesidium and survived The Great Leap Forward and the Cultural Revolution [although purged millions didn't] to become Top Gun in the People's Republic in the late 1970s. Through the 1980s he changed the economic policy and incentives of the country without [unduly] alienating the still powerful Communist Party. It's a bit like the current Pope recently making pro-BLT statements; he's got to get any real changes past The Curia.
Deng had seen the effects of economics by decree under Chairman Mao, who had some truly daft bees in his bonnet about how best to re-distribute wealth and opportunity. By imposing quotas on the steel industry, he incentivised mill bosses to turn shovels into steel billets so that they were available for the shovel factory. If there weren't enough steel-workers for the quotas, then the government would round up the members of some peripheral ethnic minority and ship them East.
Deng's insight was to leave the central-control part of the economy to creak along in its rut: everyone maintained their job-for-life if they wanted it. But Deng allowed a parallel market-led economy to flourish: if an entrepreneur was able to get 5 blades of grass to grow where only 3 blades had been previously then s/he got to keep the extra 2 leaves. That extra disposable income lubricated the growth of other entrepreneurial ventures. He also allowed foreign multinationals to get their start in the market and thereby shake up the [smug, complacent, insiders who ran the] indigenous competition to be more efficient . . . which led to further opportunities for economic growth.
In the ten years of the 80s, the Chinese market-economy out-stripped the tired-old, same-old komintern economy, so that the latter became an almost irrelevant wart on the economic bubble. Economic liberalisation didn't go hand-in-glove with political and ideological liberalisation as The Disappeared of Tiananmen Square [4th June 1989], Falun Gong and the Uyghurs have found to their cost.
Topical footnote: listen to Steve Levitt talk about incentives, Google, data and pandemics . . . in 2008.
Posted by BobTheScientist at 07:29