Home is the sailer

. . . home from the sea. It looks like s typo [which would not be unknown on The Blob, there's one in this sentence] but actually isn't because I am writing here about a thing that sails [sailer] not a person who sails [sailor].  My father grew up in Dunmore East at the mouth of Waterford Harbour, where his own father was Harbourmaster.  They lived right on the quay in the midst of the bustle of a busy little port and never far from the smell of fish. There were two things my father did well: 1) expansive land- and sea-scapes, typically with a lot of well-executed clouds; 2) messing about in boats. To be honest, I think he was happier in the contemplative quietness of watercolours than in action-packed competitive sailing. He knew the difference between a sheet and a halyard and would never unintentionally allow a gybe to happen; he could make a boat go where he wanted; but he didn't really care about getting across the line before everybody else. The Summer after he died in 2001, my sister and I went through a garden shed full of his paintings. It was triage: Irish pictures, Dorset pictures, English pictures, Foreign pictures; nautical, landscape, portrait; pencil, ink, watercolour, oils. Last year, I decided to find a home for a few of the Irish artworks where they'd be seen and appreciated.

Ireland is a small country with about 2 degrees of separation, so if you want anything done there will be a friend of a friend who can be networked to make it happen. In this way, a few years ago, I got to meet the man who, as a chap, had occupied my father's bedroom in the harbourmaster's house in Dunmore. He is currently writing a history of the Dunmore RNLI service. Pre-order your copy now! On my Blob, the RNLI is a charity worth supporting because it allows [requests & requires!] ordinary people to be heroic in very adverse circumstances. My cunning plan was to repatriate the Dunmore boat pictures to Dunmore and last Friday, after a few false starts, this was achieved. We were invited down after work to the Waterford Harbour Sailing Club WHSC, one of whose co-founders in the 1920s was my grandfather Wilfred. There I was able to off-load this drawing of Waterford Harbour looking across at the Hook Light. 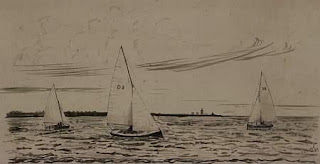 The boat occupying the painter's attention is his own "Pochard" D3 which was built by my grandfather modified from lines drawn by boat-designer and yachtie Uffa Fox. That picture will finish up in the offices of the RNLI. The date on the picture is Summer 1939 when my father was 21, a few months later he was officer commanding a Motor Torpedo Boat responsible for the lives and welfare of 10 other people and tasked to have real live action in the English Channel. Eat your hearts out today's 21 y.o.s: there's no real incommmming on your [wussie] First Person Shooter video games. 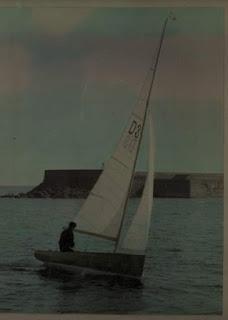 This picture [L] of Pochard pootling about in the harbour will get hung in the WHSC. Hopefully inspiring some youngsters to build their own boat rather than just buying one off the shelf. The picture is a hand-coloured photograph from the late 1930s. Remarkably, I have the  negative  of that photo, 5x5cm, which I found among the letters, photos, receipts, perished rubber bands and rusted paper-clips filling on of many cardboard "filing" boxes in the Old Man's painting shed. My father was a great and discursive correspondent but expected someone else to do the filing. My mother moved house, often when he was away at sea, at least a dozen times and each time there was triage on the clutter. So his correspondence is like the plays of Sophocles: 95% lost.
After the exchange of pictures - regrettably no hand-shakes in this Plague Year - there was because Ireland hot tea the colour of tomato soup, plates of sangers and slices of chocolate- and lemon drizzle cake. It was also a perfick Autumn evening, a hint of chill in the air after a reasonably sunny afternoon . . . and a cloudscape worthy of The Old Man over Stoney Cove.
Bonus we avoided the out-muster traffic in Waterford City by crossing the river[s] on the ferry from Ballyhack to Passage East. You can't have more fun in five minutes anywhere else in Ireland.

And here's a shout for the volunteers-in-action from Dunmore RNLI.

Home is the sailor, home from the sea
And the hunter, home from the hill
is the envoi to an eight line poem embossed on the tomb of Robert Louis Stephenson in Samoa. It's the only two lines of poetry etched on my grandfather's grave in Saltmills, Co Wexford. I was brought up in quite a 19thC atmosphere, so I rather like Stephenson. He's featured in The Blob before. His grandfather Robert Stephenson the civil engineer was the architect of the little row of lighthouse-keeper's cottages in which my sister lived on the Isle of "Kidnapped" Erraid. RLS spent part of the Summer of 1870 [aged 20] on Erraid and was clearly intrigued by the fact that you can walk across the beach to the mainland, but only at low tide.