Margraten [R heraldic flag with two white ducks merlettes] is a small Gemente municipality in Limburg, the 'mountainous' region of the Netherlands. Calling it a town would be pushing it; it's really a collection of villages, with a single fire-service and common bin-collection, a few km East of Maastrict of the EU treaty and at its nearest point is 2km from the mighty river Maas / Meuse / Mouze.  It's quite a bit further South than Nijmegen and Arnhem.  In September 1944 the latter was A Bridge Too Far in Operation Market Garden: the daring attempt to burst through the Siegfried line into Germany to bring about an early end to the War in the West. It was a bloody confrontation and thousands of US servicemen [and British Canadian Polish and German troops as well as, inevitably, many Dutch civilians] died in the short week that the operation was still running.  The consequence for the Dutch of the failure of this bold plan was the dreadful Hongerwinter of 1944/45 whose effects are being felt unto the third generation. 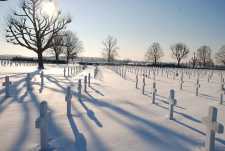 Dead US soldiers that were whole enough to be identified, both from Market Garden and in the succeeding 9 months of the war, were gathered together and interred in a new cemetery in Margraten [L in a stark midwinter]. In 1945, when the war was over and everyone had gone home - if they had one to go to - some 17,000 graves were laid out in rows and plots and sections; all neat and documented. That averages about 100 each day until the end of the war; but it was far busier on some days than others and local volunteers were recruited to help dig and bury. There is also a memorial wall with the names of those missing in action who were never found - blown to smithereens; drowned in a river crossing; consumed entirely in a burning tank.  Over the 70 years, many of the bodies have been claimed by their families and repatriated; but even now there are just shy of 8,000 graves in the Begraafplaats at Margraten.

VE day was on 8th May 1945, my mother was stationed with the ATS near Breda and took part in the mother of all parties that night. In the Netherlands, the 5th of May is celebrated as Bevrijdingsdag Liberation Day; the USA since their Civil War has set aside Memorial Day to remember their dead soldiers.  It is now officially on the last Monday in May - today! On 29th May 1945, the day before that year's Memorial Day, flowers were gathered from all over Limburg and brought to the US Cemetery. Local people worked all night to distribute the flowers across all the graves as a tribute to the boys who had died liberating a foreign country from 5 years of most onerous occupation. That was gezellig en eerbiedig - it showed that, despite considerable personal hardship, the Dutch were able to show their appreciation of the sacrifice. The flower laying put on a show and a somewhat austere celebration. What happened next is more extraordinary.  A scheme was set up by the town clerk and Lutheran pastor to make a more personal and sustained connexion - each grave was adopted by a Dutch family who kept the flame of love and remembrance alive for those whose families were a long long way away across the sea. That relationship is still maintained.  The dead are still young and fit, though long dead; the original adopters have many of them passed on but the family relationship, and flowers and remembering continues. This may well remind you of Kemal Atatürk's sentiment " . . . After having lost their lives on this land they have become our sons as well". It is traditional to remove hats and play Il Silenzio on that day and again 4 years later.
Posted by BobTheScientist at 05:50