I was on about the science-bard Christian Bök and his cunning plan to send his poetry out for appreciation by the plain people of a planet orbiting Alpha Centauri. One of the points in that essay is that we're quite possibly 'at nothing' to have been a) sending out radio-traffic or b) listening to incoming radio traffic at SETI the Search for ExtraTerrestial Intelligence. That made me think about how we can possibly expect ET and his pals to make sense of a string of binary digits. Carl Sagan and Frank Drake did it all with graphics in the famous NASA gold-plate that was attached to the outside of the Pioneer spacecraft: 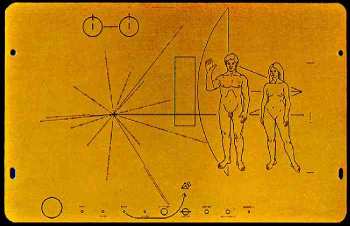 It makes you wonder what they were thinking to imagine that this was an efficient way to reach other forms of intelligent life.  Frank Drake is after all the originator of the Drake Equation:

which allows us to guesstimate how many intelligent communicative civilisations there are in our Galaxy. The answer is not very many anywhere near here. Sure if 'someone' happens upon a small object lost in interstellar space, the plaque might be a reasonable way of telling where/who we are.  The star-burst is centred on our Sun and indicates the distance and direction of the nearest stars and it's important to communicate that people don't wear clothes and that as a species there is a relatively mild sexual dimorphism. A radio broadcast is more efficient because it goes out in all directions and travels a lot faster/further than a steampunk space-ship.

You can send the Golden Plate out digitally as a string of 1s and 0s repeated endlessly. If ET can read radiowaves they will have reasonably sophisticated mathematics, the reasoning goes, and so will know what is a prime number.  If the picture is constructed as N lines of M pixels each, where both N and M are primes, then there is only one way to assemble the string into a two dimensional picture of black and white pixels.  Actually there are two ways (M x N) or (N x M) but that shouldn't try the patience of the recipients. Alan Turing and his pals at Bletchley Park worked days and nights to crack the Enigma code. Actually there are other possibilities: like the lines could be written L to R or boustrophedon [from the Greek βουστροφηδόν = as the ox ploughs = lines running backwards and forwards like a knitting machine].  It turns out that prime numbers are primes regardless of how many fingers you have.  We count in 10s, computers do binary, ET would presumably count in octal because, like Mickey Mouse, he only has four digits on each hand.

For the actuality of  making 2-D pictures on a rectangular grid, check out Matt Parker's Stand-up Maths routine of programming Excel to do this.

Posted by BobTheScientist at 05:58