I have a pal "Russ" who grew up in fishing village with every expectation (from his community if not himself) that he would spend the rest of his life fishing. His community carried out their trade in and around Waterford Harbour down-tide from where The Three Sisters - the Rivers Barrow, Nore and Suir - finally come together after rising in the same range of hills far off to the North.

The way the lads fished would have been entirely recognisable to people who lived in the area 1,000 years ago or indeed on the River Tweed [R]. They managed the stocks of fish to generate income and put food on table for all that time, each generation succeeding the last. Other people, more eager for money, less careful of consequences, adopted rapacious modern techniques for scooping thousands of tonnes of animal protein from the sea to feed to cats. Ireland joined the EEC, later the EU, in 1973 and within a short generation the commercial fishery in Waterford Harbour - first the salmon, then the eels, then everything - was legislated out of existence. Russ was washed up on shore with few choices: all of them stark a) off to Australia b) off to the pub or c) off himself. None off these appealed and, rather like The Beloved's sister The Girl Who Invented Herself, he got on his bike to secure a factory job on shore, then got himself an education and now is being useful and creative in so many ways that one could feel inadequate in his presence. To use a maritime metaphor, he might be called A1 at Lloyd's

He started bloggin' about the same time as The Blob was born and we're both still posting. But he's much more focused than Butterfly Me and his tag-line Waterford Harbour Tides 'n' Tales is what it says on the tin. Every Friday for the last 3+ years, he's posted something about the history, culture, happenings and, indeed, tidings of the area. That regularity and that corner of the blogosphere has attracted a loyal following from all over the World, many of them part of the Waterford diaspora who like to tune in and catch up with events. This writing gig is good for the writers: with Our Public awaiting, we feel obliged to get out of bed and down to the kitchen table to write - even if we're feeling crap or coming up empty.  That discipline, that restless hunt for copy, makes the task easier as the years pass. I'd like to think that the quality of the writing is also improving. Some of my stuff is really rather good; but sometimes I'll be reading the back-catalogue and be completely perplexed: I really have no idea what I was talking about back in May 2015.  On the rare occasions when I get feedback, it is occasionally suggested that I should park the dross, pick the pearls and run them together as A Book. So far, that has come to nothing.

Meanwhile at Ros an Sidhe / Russianside it has been a different story . . . which became A Book that was launched on the night Storm Brian gave the country a damn good drubbing. We set off to join in the celebration, (and buy all our Christmas presents) but the roads were really wet and the wind was really howling and at 2km on the journey we wimped out and went home. Now you can buy a copy of Before the Tide Went Out.  But you want to be quick because the 1st Edition is flying out of the printer's boxes and there may not be a 2nd. 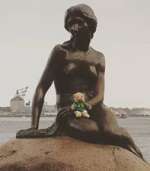 One thing I really liked about the immediate feedback was a picture of the book being read in Abu Dhabi and another of it being read on the shores of Dublin Bay. This is like the meme of sending /taking your favorite teddy round the World like PackieTheBear being photogenic in Copenhagen [L], Machu Picchu, Ballydehob and Sydney. The only genuine way to read Before the Tide Went Out is at sea in an open boat or, failing that, hunkered down in the lee of a hedge having buckets of cold salt-water thrown in your face. Salt-water boils, wet socks and a worrying lack of PPE is optional but recommended for the full-bodied experience.  If you ever think your desk-job is Hard, think about life as a salmon netter.