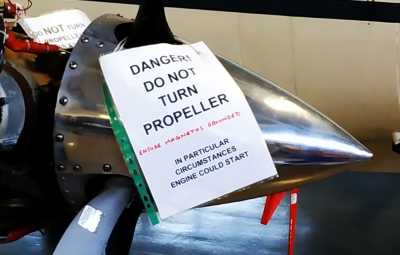 As you see from the above, I was in The Institute's aircraft maintenance hanger with a bunch of teenagers who were having a day of science and technology. Someone has donated a miscellany of aircraft, aircraft parts and aircraft extras which more or less fill the space. I like the warning sign [above], it is so retro: like the old films where the pilot calls "Contact" and a guy in overalls heaves at the propeller to start the engine. Normally the hanger is where our student aircraft-maintenance engineers get practical experience, but as it was half-term, no one was there to answer our [many] questions. 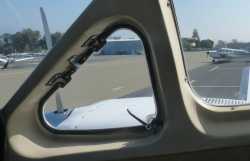 I did the best I could to satisfy their curiosity and interest. After I regaled them about bird strikes, one of them asked about a little triangular window in the side-windscreen of a Cessna 335 II light aircraft. It didn't really look like the one shown R but the function was the same.

When The Boy realised that he had no future working in Ryanair, he slung his hook to seek his fortune elsewhere in the airline industry. After a bit trouble and a bit of travel he secured a position in the logistics wing of British Airways, operating out of Heathrow. LHR is one of the busiest airports in the World shipping not just people but also stuff which needs to get somewhere else in a hurry. The company was in the process of transforming itself into a fully automated, containerised shipping service and before he left, he was well paid but very bored. On average in an 8 hour shift, he was actually working about 20 minutes. Unless you call scanning a series of progress monitors to make sure the robots were shifting the containers through a massive, multi-level hanger.  Before that it could be quite exciting: like the time 8 tonnes of fresh shrimp [from BKK to JFK vis LHR] missed its connexion and had to be <fizz, fizz> dumped. "Useless if delayed" indeed. That was a loss to someone or their insurance company of about $100,000. In those early days, sometimes the connexion would be so tight that someone (often The Boy) had to trot out onto the tarmac to hand deliver a small package to the crew of a departing plane. It may be a fantasy but I got the sense that the envelope was handed up to a triangular window in the cockpit.  As the cockpit of a 747 is 7.5 m high, I suppose they used a rather long cleft stick.

Less than a week after I was reflecting on the problems of getting stuff from one place to the other, I came across a related story of shipping human organs for transplant.  As ever, interesting and informed commentary on MeFi.  The journalistic point is made that dozens of kidneys a year get lost in transit or delayed in logistics centres or shipped to BOZ rather than BOS. You surely know someone, quite possibly yourself, whose checked bags got sent to the wrong airport and may or may not have been repatriated eventually. I bet everyone is happy to see their used underwear again, but if you had to take compo for the loss about buy this year's boxers, then it wouldn't be the end of the World. Not quite the same if it is a well-matched kidney that has travelled 3,000km to find a new home. But if you look at the numbers of AWOL organs as a percentage, it looks more exceptable

15 years ago, I was working in an immunology group in St. Vincent's Hospital. One strand of research (not really mine) was to study immune function of and in the liver. In those days, StVs was the Irish centre for liver transplants and our students were on 24/7 call to collect liver samples from donor or recipient when a match was made and the recipient was called in to obtain a new lease of life. I've forgotten much of the detail, but back in the day phrases like ischaemia or hypothermic machine re-perfusion would trip off me tongue. The transplant team used to have weekly meetings doing triage on the waiting list of people with liver-failure. They tried to apply rational, equable, criteria for the decisions about who would live and who would die.

Organ transplant is at the sexy pinnacle of the surgical hierarchy, perhaps over-shadowed by brain surgery but definitely a cut above tonsillectomies and removal of unfortunate tattoos. Part of the reason is because it is technically challenging and so only the steadiest hands and quickest reactions to adverse events need apply. But I think its éclat also hinges on the process being intrinsically more expensive than whipping out an appendix. One problem with the economics of health care and indeed the economics of government is that it is rarely expansive in its overview. The liver transplant team is making a hard choice between Hilda Doohickey, mother of six children vs Sean Masterman chairman of the local GAA Cumann. But they never think that they could disband the whole transplant unit and devote the money to
All of which are in the unsexy bin of caring for the least of our citizens. Does a just and fair society need heart transplants?
Posted by BobTheScientist at 07:35