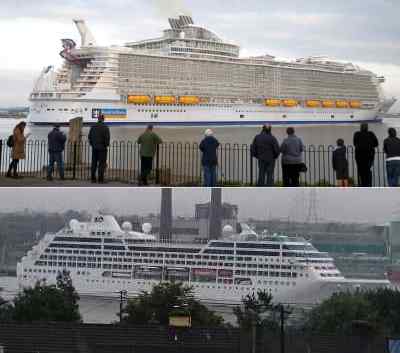 Here on The Blob, I go chuntering on to myself getting very little feedback even from my extensive Russian readership; Привет Товарищи! [See observation in post below about the fickle Russians] So it's always surprising to get a comment and double surprising - and gratifying - if it provides a different view on whatever is floating my boat. I wrote a blob about cowardice and shouldering unwonted responsibility - as it happened on a cruise liner - and got a comment from my pal Russ about how Cruise Liners are the very divil itself for laying waste the planet. Russ attached a picture [above, below] of the latest such ship that had wriggled her way upriver to spend a day or two in Viking Waterford. I've seen the similarly sized banana boats coming down river from Waterford's Belview port and it is a wonder how these monsters fit between the steeply wooded banks of the river where the Barrow meets the Suir [Bloboprev]. Because I'm a competitive sort of guy, I've topped Russ's picture with one of the Harmony of the Seas owned and operated by Royal Caribbean Cruises. Jaysus, it looks like a bit of CGI from Star Wars: there are 2750 staterooms ['cabins' are occupied by the 2,3000 crew stacked like cordwood below the waterline]. At double occupancy that's well over 5,000 people who are, even at this moment, taking 7 days cruising from Barcelona to Rome and then back.  It costs each of the punters £1850 for the week; more that twice that if you want a stateroom with a porthole through which to view the sea. Why, that's even more per night than Dau.II lashed out for her Spa Hotel weekend last month.

Is that okay? A once in a lifetime holiday which manages to take 2,300 people off the unemployment register, that's mostly harmless isn't it? - depending on how many croissants you manage to pack in during a self-harming binge to get your money's worth. Well no, actually, you are complicit in a major assault on the atmosphere by tooling about in these massive gas-guzzlers. I think the Friends of the Earth's major beef is that the fuel oil, which cruise ships get through at the rate of 200 tonnes 200,000 lt per day, produces far more asthma particles, CO2 and NOx than does my, or your, Toyota Yaris. Those are bad but the sulphur content produced by such a vessel is a 364 million times (!) worse than a single car. What price your dream holiday now?

Disclaimers.
1) My parents never made it to college. They were smart enough but university would have been quite alien for their families even if WWII hadn't intervened and given them a much more exciting and stressful education in the University of Life. As they approached retirement and with gathering momentum afterwards, they indulged a natural interest in the Arts, culture and history by going on cultural cruises with Swan Hellenic. This was a much more intimate experience than the mill of 5,000 people on one of today's megacruisers. Because they were cultural cruises there were no string quartets or drink-a-yard-of-ale competitions. Rather they would be entertained by guest speakers like the retired Dean of Canterbury Cathedral who was an expert in Byzantine icons. The kulturboffins would give a lecture the evening before a shore excursion and point out the interesting bits of masonery missed by ordinary tour guides. The Da would rub his hands together and crow "We're spending your inheritance". To which I would sententiously quote Alfred Nobel "I regard large inherited wealth as a misfortune, which merely serves to dull men's faculties. A man who possesses great wealth should, therefore, allow only a small portion to descend to his relatives. Even if he has children, I consider it a mistake to hand over to them considerable sums of money beyond what is necessary for their education. To do so merely encourages laziness and impedes the healthy development of the individual's capacity to make an independent position for himself."

2) Me, I've been on a cruise. Back in the early 80s, The Beloved was working for Sinclair Computers. She started as gopher and letter-opener and finished up Customer Service Manager North America CSMNA: you could do that if you got in on the ground floor with a small company that briefly went viral. We were living in Boston and the local boss for Sinclair negotiated a barter deal with a cash-strapped local Cruise company. 50 ZX Spectrums for 10 Cruises to Nowhere out of Boston in December. These were two night weekend turn-around cruises between much longer jaunts from New England blizzards to the Caribbean. Because we could not source a child minder we got to take The Boy, then aged about 8, as well. It was really good fun. Everything - food, drink and entertainment - was included in the price [zero for us].  We got a little chocolate on our pillows at night. There were 5 meals every day, many of them from all-you-can-eat buffets. There was a life-size swan made of ice to hold some desserts. We played crazy-golf in the drizzle as we left Boston Harbor. We got to do skeet-shooting off over the stern rail. We made little Xmas decorations out of felt. There was game with artificial horses in a race across the floor of one of lounges.  Best of all, and nothing to do with the cruise line, we got to see humpback whales Megaptera novaeangliae off Nantucket just before we turned round and steamed back to Boston at 3.5 knots. I should feel guilty about our contribution to polluting the planet to make it horrible for our grand-children, but I don't.  I was in graduate school at the time and free food trumped pretty much all other considerations.
Posted by BobTheScientist at 07:30