We lost a sheep at the beginning of July. Dau.II was home for her first home visit since Marmalade weekend at the very end of February. It would be more accurate to say that, while looking for apples, she 'found' a sheep that had expired in a quiet corner of the field. The fallen animal guy is now charging a mighty €30 for the call out on top of the €30 for EU-compliant disposal. That's a big increase from €35 all in back in 2017. It was definitely worth our while to deliver the carcass (double-bagged) to the rendering yard in the back of my Red Yaris (windows double-open). On the way home The Beloved offered to buy me an ice-cream! The very next day, I was counting the sheep, found I was one short and, casting about, saw two legs sticking up behind a stand of rushes. As I approached, with sinking heart, Lady Bracknell echoed in my ears "To lose one sheep, Bob, may be regarded as a misfortune; to lose two looks like carelessness".  But it was okay, the misfortunate beast was merely 'backed' and, on righting, gallopped off to join her rellies. Getting backed is a condition when, with a full wet fleece and an unlucky lie of the land, the sheep rolls over onto her back and cannot struggle upright again. By midnight she will be fox-food. That's one reason why real shepherds go out to look the sheep several times a day. After the long dry Spring, the warm drizzle of late June meant that fly-strike was increasingly likely 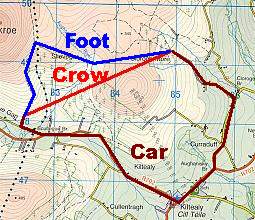 Anyway, it was clearly time to call Paddy-the-Clip and have him shear the sheep ASAP. He's a pillar of our community and shears across three counties. He's also our nearest neighbour across the mountain (the journey [map R] is about 3x longer by road) and has been right neighbourly in the matter of sheep maintenance. Not least in the fact that he'll come to us and set up his rig to shear a few handfuls of sheep when on another day he might get paid for de-fleecing 300-400 sheep. Since my thumbs started going weird, I can no longer be trusted as efficient sheep-catcher at shearing and have been politely asked to keep out of the way. That means more work for Paddy but does mean that he isn't bent double all the time and can stretch his back between sheep. And with Coronarama we can't even give him his dinner. Getting the sheep all bald was really good news for them (two were getting the beginning of maggoty) and us. The bad news is that the World Wool Market effectively closed in February. Paddy told us a risibly low price was being offered at the local Agri-Coop - I heard 15c/kg but may have been mistaken. Whatever it is well down from €1/kg for 2016, let alone €1.45/kg in the heady days of 2015. Shearing alone costs about 50c/kg. Last year it was the same, so now we have two cu.m. of close packed wool waiting for the market to recover.

This is crazy because there is at least one Irish company selling sheep wool for thermal and acoustic insulation at €8/kg in convenient 100 or 150 mm thick rolls. More power to them of course, because adding value is the only way forward in agri-business whether it's productifying fleece or making ice-cream or cheese from milk.
Posted by BobTheScientist at 07:17