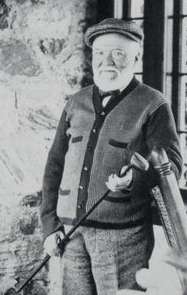 Toppling statues, in Bristol and elsewhere, has been flavour-of-the-month for Black Lives Matter. It behooves us all to scrutinise the whole lives of the heroes of our streetscapes and adjust our appreciation accordingly. Take Andrew Carnegie, for example, he started from nothing, emigrated to America and became a multi-millionaire steel magnate, philanthropist and golfer. In 1901, at the age of 66, he sold all his steel holdings to JP Morgan for $303,450,000 or  for $480,000,000 and retired on his money [what's $180million between sources?].  There are only so many yachts and mansions that you can use and Carnegie spent the last 18 years of his life endowing public libraries in Scotland and elsewhere in the English speaking world including more than 60 in Ireland . . . and Carnegie Hall in NYC! What's not to like about that?

Well the back-story is that one of the first libraries built with Carnegie money was constructed in Johnstown, PA in 1889 after the original building was swept away in a disastrous flood which killed 2,000 people. Carnegie Catechism:
Carnegie was able to become, briefly, the richest man on the planet because he was the Jeff Bezos of his day. Reducing the cost of production to the lowest possible level by increasing mechanisation but also by shaving wages to the bone. That was instrumental in the polarization of labour relations as the Amalgamated Association of Iron and Steel Workers (the AA) moved in to get a better deal for the workers. Depending on your view-point this culminated in the Homestead Strike / Homestead Lock-out / Homestead Massacre of July 1893. Should we bulldoze those libraries, because they were built with blood-money?
Posted by BobTheScientist at 07:53