My daughter the librarian sent me two books for my birthday in June; because she couldn't come visit during Coronarama. You may be sure that I would have preferred her company, with or without cake, that any amount of books. But it would be churlish not to read the books because I was in a pet and didn't get my druthers. The longer book is handiwork by Sarah Baume It wouldn't pass to call it a book of essays because the chunks are too short. Nothing as long as a single Blob here, for example. Then again, it's not a book of tweets or haiku either. It's sort of stream of consciousness from the year 2018 when Baume was putting together the makings of an exhibition of her hand-carved, hand-painted bird models.

Arty people in Ireland would probably know her written fiction better: Spill Simmer Falter Wither [Grauniad review] and A Line Made by Walking [Grauniad review]. There must be something there to get a respectful review of her first two books from the Arts Block in England. This new (2019) book shows that Baume is not just a crafter of words. The exhibition is of several dozen representations of birds made from a rough casting of plaster of Paris to which she applies a craft knife to reduce the resultant blob to something that looks distinctive to the species. Neither she, nor I, would think that these are photo-realistic 3-D models of living models but That's not the purpose. Like Viv O'Kelly and his Andalusian market-women, the search is for the essential by literally paring away the superfluous.

There's no point in doing this unless the results are different for different sorts of bird but I'm not saying that you need to know the Latin Linnaean names. That's how we, in science, communicate at a distance unambiguously what we are talking about. But knowing a bird is more than knowing its name: its call, its colour, its habitat, its flight, its appearance, its breeding strategy are all vital signs for its way of life. The LBJs [little brown jobs] are indistinguishable to ordinary folk, including me, because we don't devote enough focused-attention time to note the song, or the dark eyebrow or the orange legs. 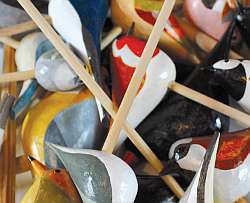 I was skeptical early on with " . . . he remarks that there are fish who swim against the current - salmon and herring - who live in the open sea but are compelled to travel back to their rivers and streams to spawn" WTF!? Anadromous herring would be a first on this planet: although everyone knows that salmon do indeed hatch in fresh water and spend their adult life at sea. But that's reported speech; albeit uncritically accepted and not about birds, carving, painting or creative writing. [erratum: The Blob is just being ignorant about the natural world here: alewife and shad are indeed anadromous herring if you're broad in your use of "herring"]
In the end, the publisher has allowed a dozen bird sculptures to ornament the text; forming a thread that tethers the narrative to a finite part of the natural world and the written word:

While we're in memoir-land; check out Emilie Pine's Notes to Self or Kathleen Jamie's Sightlines - which is also heavy on birds. On blanking the confounding noise to reveal the essential signal, I've mentioned Matisse - Viv "Al Andalus" O'Kelly - Edvard Munch - Saccharomyces.
.
Posted by BobTheScientist at 07:29