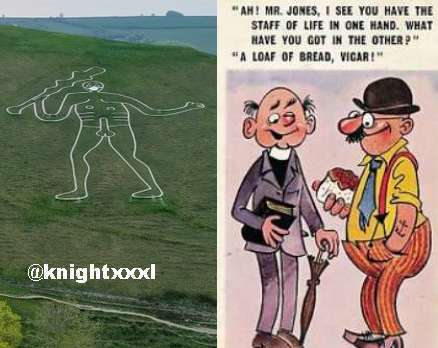 The Cerne Giant [L above] is on a hillside two villages over from where my parents lived in Dorset. His todger is 10m long and his club even longer. There have, of course ,been rumours that IF you desire to fall pregnant THEN visiting himself at night will help things along . . . you have to lie with a a real man as well; we're not talking about miraculous conception here.  Recently, some enterprising prankster added a contemporary mask to the big feller's face.

On a more historical front, National Trust archaeologists have recently put an 'earliest possible' construction date on the Cerne Giant. It's a dynamic structure, if everyone just left him alone then the grass and forbs would inevitably eat into the crisp white outline and in a generation there would be virtually nothing to see here. In 2019 a team of local volunteers hammered 17 tonnes of chalk into the white bits to make him all bright again. They do this every 10 years or so. While the labourers were doing the heavy lifting, the archaeologists went with their tooth-brushes to look at the interface between giant-work and bed-rock. There they revealed long dead shells of the vineyard snail Cernuella virgata, apparently crushed by the initial excavations.  But C. virgata is a blow in from continental Europe and was unknown in England before 1300.  The first written record of the Cerne Giant is in 1694.  It is thus much more likely that the picture started as a satire against Oliver Cromwell (1599-1658) than that it was subject to neolithic fertility caperings.