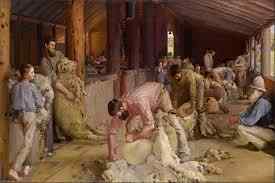 I only use titles like Shear Stress to suck in engineers under false pretenses. Make them step away from their construction sites and get down and dirty [Q. What's brown and sounds like a bell? A. Dunnnng!] in a different way. Last year, on the 10th of July, we were much later that we'd like to be shearing our ewes. [R Shearing the rams by Tom Roberts 1890]. See also Ramming the Shears by Michael Leunig?  This year, the 10th of July came and went and we still hadn't seen Paddy the Clip; although we knew we were on his list. The only thing that makes farming viable as a way of making a living is if YouTheFarmer do pretty much everything yourself. If you have to employ 'hands' to do the ploughing, mowing, shearing, muck-spreading, milking and doctoring, then you'd go bloke. Contrariwise, if you can do these things and have the appropriate equipment, you can do them when it suits you.  If the weather is fine and dry, everyone wants to cut grass for hay or silage; the contractors are mad busy for all the daylight hours and into the night.  If you have, as we have, a handkerchief-sized farmlet, then you're going to be last on the contractors list and you'll probably miss the rain-free window in the weather, the dreaded ragwort Senecio vulgaris will be up in your meadows and the thistles Cirsium arvense will go to seed with abandon. The sky won't fall, but the farm will be a mess.

Yesterday we were off-site.  I was up in Dublin listening to Reports From The Frontier by a couple of bright young scientists in TCD. The Beloved went off in the opposite direction to look after Pat the Salt, her aged father. Young Bolivar was holding the fort and shaking sticks at the sky  to prevent the rain falling until Friday lunchtime because we'd been promised a shearing session on Friday morning. Mid-afternoon, I was on a noisy street in Dublin when I got a call from home to say that Paddy the Clip would be coming at 7pm and would I be coming too? I caught the next available bus to Enniscorthy, where'd I'd left my car that morning.  I had, I though, plenty of time . . . to buy some eggs, a bit of fish-for-friday and a bottle of plonk to wet the fleeces. Half way through this process, I got another call to report that Paddy was incommming in 10 minutes and where was I?

This year we have 24 ewes - up from 19 last year; which tells you how successful we were at the lambing in 2015; that and the freezer full of ram-lamb which we are slowly working through. Worse than having the shearer come early was the fact that a little drizzle had started: a wet fleece is ungood for quality: the moisture encourages bacterial and fungal destruction and may even lead to spontaneous combustion.  Anyway, I arrived about 10 minutes after the shearer and was able to throw on my work clothes and help unload the shearing floor from the trailer. We decided to do the shearing up in the polytunnel where it was a) not raining and b) less fly-blown c) nearer to an active electrical socket.  And it was done.  It took a couple of hours at about 5 minutes a sheep.  This is not record breaking but I don't think that I notably slowed up the process.  My task is to first catch your sheep, then up-end her and deliver her, sitting, to Paddy.  He then, without apparent effort, removes the fleece.  A much diminished animal is then allowed to rejoin her pals.

I only finished down on the floor once and that was more of a stumble than losing a wrestling match. But subduing sheep is a young man's task, I'm not as bouncy as I was, and Young Bolivar had a go. He is up for anything: carpentry, block-laying, stone-masonry, graphic-design and now sheep-dragging. Some sheep are harder to handle than others: this is partly glinting yellow-eyed malevolence but mainly due to weight. Some of the sheep you can almost lift with one hand and others are the size of a small pony. The fleece is proportional to surface area. Despite being late to shear we only had 2 sheep with fly-strike . . . same as last year.  If we kept proper records we'd know if they were the same animals and could off-load those sheep as trouble.  Then again, I'd rather 'off' the yellow-eyed monsters. Strike is caused by the blowfly [probably Lucilla sericata, Ir. = carrchuil] and a period of warm humid weather makes it more likely. The later you shear, the more likely that at least one such weather event will occur. Dagging, which I did last year, helps clean up the read-end and so reduces the likelihood. I still smell of sheep this morning but I'm happy we're done for 2016; not least because it rained all night and the fleeces would be sopping if we'd left the sheep out in the field unshorn.

The price of wool in Ireland is now €1.00/kg down from €1.45 last year.  Damn those Chinese for not wanting to make more blankets!
Posted by BobTheScientist at 06:30