I don't mind being wrong. Getting caught without pants is an object lesson in not being too snitty, snotty and certain in what I write. But really: twice in a week is making a bit of a pigpen out of  The Blob's signal-to-noise ratio. First I had to eat 'umble pie about my over-ethusiastic support for John Ioannidis' conclusions about the rate of Covid-19 positive in California. I know where that came from: my desire to flag the winner-takes-all way in which Coronarama is causing collateral deaths from undeclared coronary infarctions, and from parking breast-check, cervical screening and bowel-cancer surveys. Let alone my neighbour Liam who went into hospital for a diabetes episode, caught SARS-CoV2 and died with that 'existing condition'.

Then just at the end of last week, I had a go at Sara Baume for talking about anadromous herring: She: " . . . he remarks that there are fish who swim against the current - salmon and herring - who live in the open sea but are compelled to travel back to their rivers and streams to spawn"
Me: WTF!? Anadromous herring would be a first on this planet.

I'm glad my pal P from Massachusetts is a) awake b) reads The Blob c) knows about the alewife Alosa pseudoharengus which runs up many New England and Canadian rivers to spawn. This meant that she could pull me <tsk! tsk!> up on my error: because Alosa pseudoharengus is in the same family as Clupea harengus the Atlantic herring. Then again, fisherfolk have different common names for other [not anadromous] Clupeidae, as I acknowledged by in 2017: There is another species Clupea pallasii in the Pacific and the genus is related to sardines Sardina pilchardus, shad Alosa alosa and menhagen Brevoortia tyrannus all of which are hunted for food. Indeed the family Clupeidae comprises at least 200 named species. Which is all the more reason for using Linnaean binomers even in common discourse so everyone is on the same identification pages. Otherwise we're all Humpty-Dumpty in our discourse and nobody knows what? we're talking about. Bean there before with peas - igloos - fulmar - bergamot - bollix - lost in translation . . . mais revenons nous à nos gasperot: 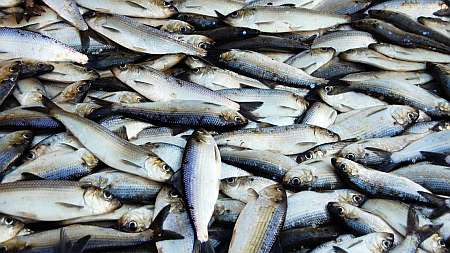 Alewife [some of them above] were fantastically numerous when Europeans arrived in America 500 years ago. Maine lobster-fishers love to bait their pots with alewife partly because they can be scooped from the water by the basket [above]. The end of the Red Line on Boston's MBTA is called Alewife because the station is situated near Alewife Brook a tributary of the Mystic River [cue Van Morrison, why not?]. On toponymy Gaspereau Nova Scotia is named for the runs of Alosa pseudoharengus.

I met P when we were both in graduate school in Boston University in the 1980s. I was looking at the colonial history of New England and the Canadian Maritimes: tracing the waves of French, Dutch and English immigration through the genetic variation of present day domestic cats. It sounds unlikely, but the hypothesis turned out to have a surprising amount of internal consistency. I read a lot of books about 17thC colonial land-settlement, trade, commerce and agricultural practice. I was shocked to find that fish were so abundant that they were used as agricultural fertiliser which seemed completely arseways. A rich amino-acid-balanced source of animal protein, which could have fed the populace, was being used to grow a lysine-deficient sort of protein in corn Zea mays. Maize has to be grown and eaten with beans and squash to achieve a balanced diet. Alewife was particularly prized because it delivered itself inland during the spawning season and so saved on transport costs! As late as the 1880s 200,000 tonnes of fish was being rendered for oil and the dried carcasses being sold for fertiliser every year.

But before we get on our certainty horse to berate the rapacious exploitation of the natural world by The White Man, let's note that the idea of using fish for fertiliser was shared with the Puritans by Squanto their Native North American Liaison Officer NNALO. The local NNA name Munnawhatteaûg corrupted to menhaden, means literally 'fertilizer' (that which manures), "Afterwards they (as many as were able) began to plant ther corne, in which servise Squanto stood them in great stead, showing them both ye maner how to set it, and after how to dress & tend it. Also he tould them excepte they gott fish & set with it (in these old grounds) it would come to nothing, and he showed them yt in ye midle of Aprill they should have store enough come up ye brooke, by which they begane to build, and taught them how to take it, and wher to get other provissions necessary for them; all which they found true by triall & experience".

I had just finished beating <mea clupea mea clupea mea maxima clupea> mea breasta about anadromous alewifes when I picked up My Next Book David Cabot's 1100g weighty Ireland - a natural history. He washed up in Wexford in 1959 to start a BA in Natural History at TCD and never left. He got an Honorary Degree from TCD last year. In his book, he covers two other "herrings" which thrash up Irish rivers to spawn: allis shad Alosa alosa and twaite shad Alosa fallax. The latter is still to be caught at the head of the tide on the river Barrow at St Mullins. Well that was in 2015: maybe not so much now because twaite shad was 'vulnerable' on the 2011 NPWS RedList for Ireland; and the water quality on the Barrow hasn't gotten any better over the last decade. Alosa alosa is common enough in Europe but so rare in Irish waters that Red List labels it "data deficient". And the bottom line: a) there are anadromous herring if you define herring broadly and don't limit it to the kipper herring Clupea harengus, b) I was in error.
Posted by BobTheScientist at 07:40