Philip Nolan is President of Maynooth U and a really smart chap, trained as a doctor, prized as a teacher, acknowledged as a researcher in the neurological control of sleep apnea. As the public spokesman for one of the few Irish Universities, he's often being called up by journalists for a soundbyte on matters of public health policy. And why not? He seems to be doing a good job bringing Maynooth from a sleepy 19thC seminary to take its place as a great liberal arts university. As an active tweeter, he doesn't need to be asked to put something into the public domain. At the end of June, he posted a rather interesting thought experiment on the idea that Fortress Ireland, having sucessfully flattened the curve, could fight off incommmming Covid-Hordes by doing a quick PCR swab test at the Airport which would be no more onerous than inching through Customs, Immigration, Passport Control and Homeland Security at La Guardia.

He was using guesstimated numbers, so the details of his outcome may vary but they are likely to be in the correct ball-park. First off is to disabuse any fond fancy that a quick swab is easily endured. To be done properly [and there is no point otherwise!] the administrator has to insert a loonngg cotton-bud waaay down your gullet, beyond the gag-reflex, and scrrrrape the epithelium. If your eyes aren't watering and your fists balling for a fight response, then it's not down far enough!

No test is 100% accurate, as when Leonard Mlodinow was unexpectedly tested positive for HIV. You'll get both false positives and false negatives as well as getting the answer correct. For a test to be useful the correct answers have to far outnumber the incorrect ones.These two wrong answers can be reduced to two key statistics: the specificity and the sensitivity respectively. Nolan Estimates:

Testing, say, 50,000 people at the airport at the airport is going to cost someone something North of €100 each. Nolan calls it £6,000,000. Numbers are down a bit but in 2019, 30 million people arrived at Dublin Airport - about 100,000 every day. On those numbers the annual cost of Covid testing would be €3 billion! It only costs €60 billion to run the whole country. That's going to be a very hard pill for the Finance Minister to swallow and I very much doubt if tourists and executives are going to pay €100 each for the anti-fun privilege of having their throats reamed out. But the other problem identified by Prof Nolan is that the people who are flagged as positive who are in fact whistle-clean far outnumber the actual Perps.

Numbers on a screen mean so little. For most of us, most of the time, a billion is about twice as big as a million: so Jeff Besos's net worth and the GDP of Hungary are about the same at €130 billion. With that money he could buy 1,000 flash new yachts with a helipad.  So I reconfigured the blocks in the diagram above to a scale of 5 people to 0.25 sq.mm. 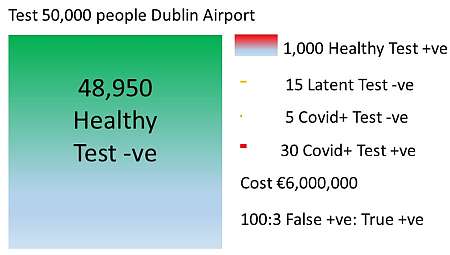 To isolate those 30 real epidemiological hostages to Ireland's economic fortune you've got to accommodate 1,000 other totally clear, clean-living folk in whatever pod the new Minister of Health deems appropriate. And remember, every day two such batches of incommmers are going to be tested and kept away from the rest of us. For once, I don't know what the answer is but testing for live virus Ain't gonna happen!