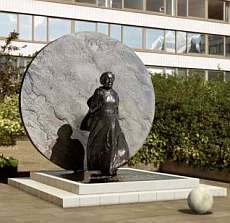 Statues are potent political symbols, not least because they are not usually installed behind the bike-sheds but rather in the centre of town where everyone can see them; often upon a durty great plinth so they can be seen better . . . the plinth also stops gurriers climbing on the horse and so aspiring to greatness in their turn. Andrew Carnegie [bloborecent] started on $1.20 as a 13 y.o. bobbin boy in a cotton mill and retired on his money richer in real terms than Jeff Bezos will ever be. If life was black & white, our moral and ethical stances would be a lot easier: Hitler [prev Irish connexion] = Bad; Mother Theresa [prev Irish connexion] = Good. But when people, like Edward Colston or Andrew Carnegie, were both rapacious capitalists and generous philanthropists we are forced to reconsider our smug certainties.  No patriarch has a greater desire than me to big up women - in science, in history, [Hanna Reitsch] in politics [Kolinda Grabar-Kitarović - Vigdís Finnbogadóttir] in the future.  The statue at the head of this Blob is right opposite the British Houses of Parliament in the grounds of St Thomas's Hospital, Westminster. It is of a woman (it's the skirts silly); it's on hospital property because Mary Seacole was a nurse; that hospital so that she would perpetual reminder to The Man that you can't keep a good woman down. Bronze, as opposed to white Carrara marble, is appropriate because as well as being a nurse, "Mother" Seacole was [¼ if you care about detail] black. So much, so certain.

But it's like “Eskimos Have Fifty Words for Snow” is an amazing phrase, because every word in it is wrong. Mary Seacole was neither a mother, nor a nurse, nor black. And insofar as she "bought cheap and sold dear" in her various business ventures, she was as much a capitalist as Colston and Carnegie. But we gotta have some affirmative action on the street-scape if we're going to see tribs to folk other than white male soldiers and politicians. Let's look at the several claims.

If by "black" you refer to anybody with a touch of the tar-brush, then everyone is black if you go back far enough. Not very far in the case of my children, one of whose eight great-great-grandmothers was authentico africano but Dau.I the Librarian is the only one who catches comment because she's a) at the front desk b) tans well and c) has super curly dark hair. Her brother and sister pass no problem for white which indicates just how fatuous the whole concept is. Today's hero was born Mary Jane Grant in 1805: offspring of a Jamaican "doctress" aka herbalist, midwife, hygienist, healer and Lt James Grant, a Scots army officer. There is no mention of the mother's name and it's likely that Mrs. was a courtesy title. Mary Grant was happy in her own skin, called herself creole and was proud of both threads of her chromosomes. In her 30s she married Edwin Horatio Hamilton Seacole perhaps an illegitimate son of Admiral Nelson [woot woot Irish connexion alert] . . .

. . . who died within a decade and there is no mention that the union was blessed with children. It is, therefore another courtesy title when the "Hotel" she established in 1855 between Balaklava and Sevastopol was known as Mother Seacole's. She had applied through official channels to ship out to Crimea (did I mention there was a War on? and Florence Nightingale [Bloboprev] was recruiting nurses /orderlies). But The Man wouldn't entertain her application, so Seacole shipped out on her own nickel. She rocked up in Balaklava with a pile of  'stores' with the intention of providing some infra-structural support to the British and French armies. She and her business partner scavenged, begged, half-inched and accumulated the matériel to build the 'hotel' which was really a sort of general store and bar; familiar in any and every small town or village in Ireland. In O'Shea's of Borris you can [or could] buy a pint of plain, a packet of crisps, a pair of gumboots, a lump-hammer and a 25kg bag of chicken feed all the while watching the rugger on the telly. Mother Seacole's would sell anything from a needle to an anchor and a tot of rum too. Reading between the lines, the whiff of alcohol was at least as much a cause-for-pause among regular Victorian folk as the shade Mrs. Seacole's skin.

But the reason for the statue in Westminster is nothing to with running a shebeen in the Crimean War, it's because Mary Seacole was a nurse in the Crimean War . . . overshadowed by Florence Nightingale's over-bright lamp and so quite unfairly written out of history. And the subtext is . . . because she black. Seacole was a bit of a celeb after her Crimean escapades: she got to know a lot of really influential people in adverse circumstances and they bailed here out later when her business ventures went belly up. After she died in 1881, the details of her contribution faded from the collective memory, school text-books and the newspapers. 100 years later, the revisionists started to polish her reputation and with the turn of the current century the Rehabilitate Seacole Campaign acquired legs and raised £500,000 to de-invisible her. In 2013, the transport charity Sustrans sponsored lacy steel sculptures of Seacole, Alan Turing and Paddington Bear (august company indeed) near Paddington Station in London.  But the contemporary evidence that Seacole was any sort of a nurse in Crimea is patchy at best and this disconnect has exercised Canadian biographer and anthropologist Lynn McDonald in two papers 2016 & 2013.  The evidence is that on 18th June, 16th August and 8th September 1855, Mrs. Seacole sold a load of refreshments to battle-field spectators and then provided first aid to the wounded. Nobody questions that Mrs Seacole was compassionate, generous and not totally driven by money. But there's more to a nursing qualification than doing your bit in a crisis. By that criterion my pal Michael Farrell is a nurse because as a young squaddie in the army he was on hand after the 1974 Talbot Street bomb and I'm a nurse because I saved a fat lady from going under in the swimming pool in 2003.

As the nursing and caring professions are disproportionately filled with female POC and knowing that is not going to change anytime soon, then young women who cannot "pass for white" will need role models and exemplars to look at and aspire to become. But Mary Seacole, while colourful, is a lazy-arsed choice in that department. And it is invidious to make an adverse comparison with Florence Nightingale who really was a giant in the second half of the 19thC: not only for inventing and organising an effective system of nursing care for wounded and diseased soldiery but also for having a really good understanding of the importance of gathering, collating and mobilising data to better inform epidemiological and nursing practice. It's 70 years since Windrush Generation nurses started to arrive in Britain from Jamaica, Trinidad and Barbados: surely some of them gave a lifetime of brilliant, thankless, stirling work in British hospitals. What about a statue to one of them?
Posted by BobTheScientist at 07:37