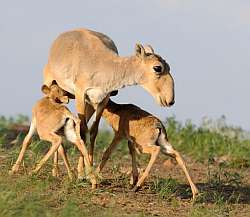 Q. Want some good news?
A. Aye, surely!
The Saiga antelope Saiga tatarica is a Eurasian artiodactyl closely related to the Springbok Antidorcas marsupialis of Southern Africa. They used to range over the whole continent from the Caucasus to China; indeed if you go back far enough Pleistocene fossils ave been found from North America to the Western European Archipelago WEA. The species have been under pressure from people a) who want to close borders which impacts on this long-range migratory grazer b) who want their horns for woowah medicine and are prepared to pay €5,000/kg for them. Census numbers were steadily edging down but fell off a cliff in the Spring of 2015 when haemorrhagic septicaemia raged through the population killing half of them [The Blob then]. Their genetic diversity is low because habitat destruction, pollution and rifles have forced the species through several genetic bottle-necks. If a pathogen rears its deadly head, then all the Saiga will go down because they all have the same, inadequate, immunological tool kit. In 2015 it was Pasteurella multocida and Clostridium perfringens, normally innocuous members of the normal bacterial flora, which went postal perhaps because of a really crappy weather system that blew through the steppes just before food started to pick up after the Winter but after the calves had been dropped. The grasslands were littered with corpses.

This season has seen a spectacular rebound in calving, with more than 500 neonates located and tagged in one region of Kazakhstan which is being comprehensively monitored by rangers.  That's compared to N = 58 in 2018 and N = 4! in 2019, so everyone involved is clicking heels for joy. Apparently you couldn;t hear yourself think for the bleating. Check out National Geographic where there's a 6 min micro-documentary on the recovery project. via IFLS