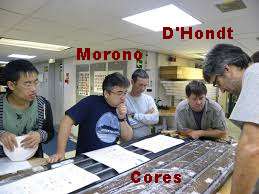 Tinker tailor soldier spy . . . so many ways of making a living. Kids still want to be <borrrring> doctors and digger-drivers because they don't know that a living can be made as a derivatives trader, youtube-influencer or <boRRRRing> deep-sea core driller. Core-drillers are in the news last week because a consortium from the Kochi Institute for Core Sample Research, (JAMSTEC) and the Graduate School of Oceanography, University of Rhode Island [R] have turned up a zombie microbial community deep in the Abyssal Plain of the South Pacific Gyre.  The location and pandemic paranoia have spawned a bunch of waggish Cthulu Lovecraftian commentary.  Including my title flagging a new species of Gammaproteobacteria Escherichia shathak named after Theodor Escherich and the Mistress of the Abyssal Slime, Death Reborn. The worry-wart commentary hinges on the fact that we are currently dealing with a jumped-the-species-barrier drain on the resources of the epidemiologists, pathologists and ICU beds. Not to mention production of masks, hand-sanitizer, PPE, flour and toilet-rolls.

If you're that way inclined you're not going to take solace from one of the lead authors' airy What could possibly go wrong?: [Cosmos quote] To begin with, he says, if such a plague were possible, it would probably already have been produced by offshore drilling, which has long been stirring up similar sediments on a much larger scale. But the reality is that bacteria in the deep seabed aren’t something we need to worry about. “Pathogens are common in harbors,” D’Hondt says, noting that these are places easily contaminated by human waste. “But they’re not common in the deep ocean or the sediment. It’s just the wrong environment for them.”  Like bats or sooty mangabeys are the wrong environment for human pathogens . . . until they're not.

We need to take on board Tony Kavanagh's comment "extraordinary claims require extraordinary levels of proof" about the outlandish and rapidly discredited claim that some bacteria use arsenate instead of phosphate in the backbone of their DNA. Anyway, let's look at the science which claims that
Take that last claim: they have been remarkably successful in bringing these zombiobes to life and growing them under laboratory conditions. Up until very recently, it was reckoned that 60% of the bacterial species in our own guts could not be grown on a Petri dish. Deadly nosocomial pathogen C.diff was named difficile for this very reason. They seem to have set up a micro-aerophilic (low oxygen) environment enriched with stable rare isotopes of essential organic atoms 13C and 15N and found that these isotopes are taken up and incorporated by the microbes. Furthermore the microbial cell count, after a slow start, increased by up to 4 orders of magnitude, within 68 days of the start of the experiment. 68? that's not even a whole number of weeks or months. When I see those sort of numbers, I am alert for the possibility that someone is cherry-picking the data to get the most exciting outcome. A similar concern has dissed claims by covid-19 antibody test producers that they are 100% accurate . . . in the 8 patients which were tested 17 or 43 days after infection [BBC listen now, 'tis bri'nt].

They have been able to separate out single microbial cells grow them up in the lab and sequence their 16S RNA, which allows these antient bacteria to be slotted into the Tree of Life by comparing their 16S sequences to known bacteria. That's where the diversity list in the penultimate bullet [above] comes from. These bacteria have been living in tiny pores in these clay sediments, only a tiny fraction of the revivified bacteria come from phylogenetic groups in which spore formation is characteristic. Jaysus, what a life! It's like living out the endless days in a dark coffin deep in the earth, if these poor microbes ever got an itch, they haven't been able to turn around to scratch it. Nevertheless, and to bring this essay full circle: "There are more [ways of making a living] in Heaven and [beneath the] Earth, Bobatio, than are dreamt of in your philosophy".
Posted by BobTheScientist at 07:49