Bleh bleh it's hot in here 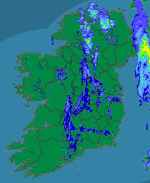 Yesterday, after a dry start, it was threatening rain [R snapshot from the www.met.ie rainfall radar] coming in from the West in a front. We were also promised a couple of hours of our shearer's time "in the evening". You can't for a variety of reasons shear sheep in the rain: the electrics short out; the wet fleece starts to ferment and it gets slippy under foot.  So I was a teensy bit antsy in case we missed our window of opportunity - it's about 3 weeks later than we'd like to be shearing.  Time was, the shearing hereabouts was left till July because wool was worth folding money and the longer you left it the longer the wool. Those were the days when young chaps were told to pick up every bit of stray fleece and stuff it in the bag.  Then the price of wool collapsed and it cost more to shear than the wool was worth.  A few years ago, it was down to €0.40c/kg which meant that each fleece was fetching €1.50 and costing €2.00 to produce. You had to shear anyway as a humanitarian gesture - it's no fun sitting on a sunny park-bench perspiring in a scarf, hat, woollen jumper and overcoat, surrounded by flies.  And also as good husbandry: if the sheep get "the strike" [myiasis], the maggots have a field day under the wool and the the raw inflamed flesh attracts more flies until you have a bloody mess and a sickening sheep on your hands. For closely related reasons, good husbandry dictates that dagging is a good idea and I felt pretty smug yesterday when only one of the sheep had a really shitty arse; me having cleaned everyone up with scissors and detergent at the end of April.

Half an hour earlier than expected we heard Paddy the Clip and his trailer rattling up the lane as the clouds started to look really lowering. We were also fortunate to have Dau.II present as an extra pair of hands.  She is a notorious light packer and had come for a four day visit (including someone's birthday party) with one pair of jeans.  Nevertheless, she waded into hoosh sheep into the crush, open gates, close gates, go fetch a glass-hammer and generally be handy. "If my friends don't like me smelling of sheep, they're not very good friends are they?" The heavy lifting fell to me, my task being to deliver each sheep seamlessly to the shearing floor just as the fleece of the last one was scooped into the bag by The Beloved.  I'm getting better at this, as I need to, because a fully grown ewe weighs almost as much as I do and they don't generally like being turned upside down.  I sometimes wish I'd done Tae-Kwan-Do when I was young . . . er, no I don't.  But it's much easier to divert the energy of the sheep like a zen master into useful directions than to batter it out head-to-head.

Only 2/19 of the sheep were a wee bit maggoty and getting their fleece off will be enough to dry/fry any insect survivors.  We now have a cu.m. of wool to take to the Co-op.  Prices are up this year as high as €1.45/kg, so we'll make a very modest profit on the work. It's amazing how diminished and deflated sheep look after shearing [imgur image]but b'god they're a lot happier in their own skins. Next sheepy task - The Ram.

As night was falling I went on a final check to count heads in the little patch of green outside our sheep-handling unit. Two handfuls of t'buggers had escaped into the haggard through a saggy bit of fence. That was okay but one of the lambs had twisted his neck in the sheep-wire and fallen backwards off the wall. We prefer to have the lamb hung for a few days after slaughter rather than hanged as the method of dispatch. Note to self: always carry pliers when doing the rounds, they can, as here, save distress or worse.  Note to self: good fences make good neighbours [Frost] but clear boundaries also make life easier for everyone - must resolve to replace with wire that is a) upright b) taut c) without gaps at the bottom.
Posted by BobTheScientist at 06:44