Monday 0700 hrs, sunny morning, one lonely orange to be eaten; so I threw a cushion on the stoop and started to peel my breakfast. My eye-sight is getting quite degenerate but I don't need glasses to peel an orange. As I looked the day, I saw a bit of fluff on the flagstone at my feet which, turned over became a shrew. I not a real biologist; they can name a tree to species from its winter silhouette, and have an inventory of the 100 commonest birds and butterflies in the country. But I know the difference between shrew and mouse. ID is easy for Ireland because there's only one species of native Irish shrew Sorex minutus, which is the smallest mammal of which we know on this island.

Or that's how it was when I was in college. Since 2007 another much larger, though still much smaller than a bread-box!, shrew Crocidura russula has been introduced and is spreading rapidly through the countryside. I think that's what we have here: 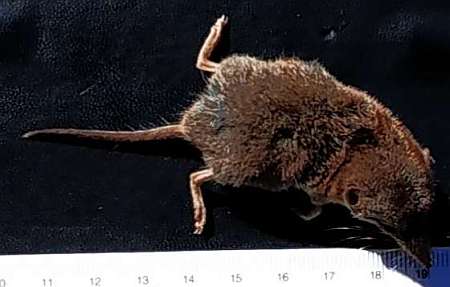 although it is a bit edgy because I only have a single datum and no comparators. Sorex minutus weighs less than 6g has red-tipped teeth, inconspicuous ears and a long hairy tail; while Crocidura russula (greater white-toothed shrew) is 3x bigger, white teeth, prominent ears, long white hairs on the tail. But my lad weighed in at 7g and it wasn't until I put the corpse on a black background that I was able to twig the white hairs sticking out on either side of the tail. I think I must have a juvenile Crocidura russula which is the Occam's razor way of reconciling the inconsistent weight data. What's a prominent ear, FFS? My ears? A jackrabbit's? Elephant's? 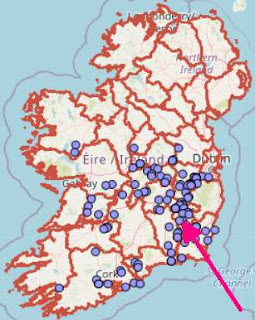 Anyway I've grassed myself up to the National Biodiversity Centre in Waterford, and if a) they're not on Summer hols b) they care; then they will get back to me about the species. The bigger shrews are spreading rapidly through the country at the rate of 5km a year (which is a long walk for a small chap to find a mate) and displacing their smaller cousins wherever they get established. It's going to be like the retreat of red squirrels Sciuris vulgaris in the face of Sciurus carolinensis which is American: greyer, bigger and more competitive.

Note to self: do not leave dead insectivores, no matter how small, in the sun on the black cover of your field notebook . . . unless you want little, sticky, sicky puddles at each end.
Posted by BobTheScientist at 07:09