That would be Chinua Achebe. I've just finished a book of his essays and talks The Education of a British Protected Child. It was published in 2009, although the chapters are all, with one exception, from the previous century. It is a bit repetitive, because it's easier to "edit" such a book by clagging a bunch of stuff in unchanged rather than reordering the material and deleting the duplicate anecdotes. That sounds petty and pedantic but it matters because it looks like the old chap had a rather limited number of original ideas and tended to rechurn them for different invitational events.  He was 30 when Nigeria achieved independence from Britain in 1960. He was an Igbo from the Eastern part of the country and one of the first graduates of the University of Nigeria at Ibadan. His first and best book Things Fall Apart 1958, established his reputation as an African man of letters and he worked for several years after independence for the National Radio Broadcasting service.

Nigeria existed as a colony because the Brits didn't recognise black people as individuals; just generic units who lived within borders that were agreed in London, Paris and Berlin. There are 500 different languages spoken and an ingrained tension in the fact that Islam holds sway in the North but various Christian sects got in there first, with missions, hymns and converts, nearer the coast. In Ireland everyone speaks the same language and until recently almost everyone was Christian but that hasn't stopped pogroms, civil war, ignorance and intolerance since the foundation of the state 100 years ago.

The Beloved and all but one of her sibs was born in Kano, Northern Nigeria. In 1953, a riot erupted between the ethnic Hausa, the local Northerners mainly opposed to independence and the Igbo and Yoruba from the South who were agitating for independence now. It was May and most of the family had gone out in the bush for a picnic and swim. The Beloved's Auntie Margot, then 17, was feeling crook so elected to stay at home.  A mob burst into the family compound looking the William, the family's Igbo cook.  They paused when they saw Margot, whom they all knew by name, at the front door and demanded that she turn over the poor Southerner. Margot's response was to ask them to wait while she went inside. She re-appeared with her father's double-barrelled shot-gun and invited them to leave the compound because it wasn't going to end well for at least two of them if they stayed. 50 people met a violent end that weekend, but not William.

Nigeria lasted just six years before democracy was replaced by a military coup, then a counter-coup and the secession of the Eastern, primarily Igbo, Region from the Federation to set up the Republic of Biafra in 1967. I was 13 at the time and watched the bloody civil war to restore the Federation unfold on the television over the next two and a half years. The Federal junta, led by General Gowan were supported by the British government as they blockaded the Igbos and other Easterners in Biafra and relentlessly squeezed the life out of the secessionists. Chinua Achebe had left his radio job and Lagos to bring his family to the ethnic safety of Biafra. The Achebes all survived, although 2 million people died, most of them small children, mostly from starvation and the diseases attendant. Médecins Sans Frontières was founded during this conflict. 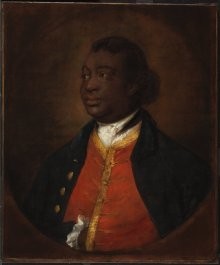 The picture [L] by Thomas Gainsborough is of Ignatius Sancho (1930-1789) acknowledged by Achebe as one of the few pictures that recognised the humanity of people of tan, rather than treating them as specimens for consideration. That's 250 years ago and the respect accorded to Sancho, greengrocer, author and friend of the Great and the Good is notable for its exceptionalism. Most black people were othered as inherently inferior if not actually enslaved for 100 or 200 years depending on how you work your definitions. Achebe gives a telling example of how even in his time, and ours, black people are treated to different levels of dignity and respect. He cites a PBS/BBC documentary about sex and reproduction in the animal world. Daringly, the directorial team decided, as the final scene, to film a birth in a London maternity hospital. Nobody noticed, or nobody cared, that everybody in the room, cameraman, key-grip, best-boy, director, midwife, obstetrician was white but the utterly exposed, labouring, mother-in-progress is from Ghana. It was a good long while before white women could be filmed giving birth on national television.
Posted by BobTheScientist at 07:24