The Beloved and I have different last names and sometimes it's easier to admit to being Mr Farmer  rather than pedantically insisting on being Dr Scientist. Maybe especially over the telephone when giving directions for a parcel delivery, for example. There have been a couple of times when a telecalls operative has refused to talk to her because the account was in my name, or vice versa. Effectively the TelOp would engage with anyone who sounded like a man and affirmed that they were me. But The Beloved [everything I own is hers]  is met with a finger-wagging no no no, you can't fool me, you're a woman. People do this all the time: I am sure that a woman-who-sounds-like-a-man gets a little more credence on the wireless; and we're probably pretty good at guessing the age of people whom we can hear but not see. In all these cases we're acting Binary rather than Non-Binary and in 99% of the encounters that probably works fine. 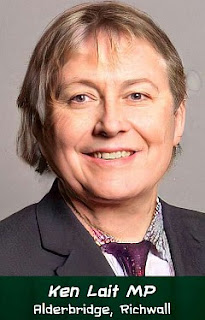 YMMV but, if the answer hadn't been given in the footer, I wouldn't have binned Ken [L]ait in among The Patriarchy. It's okay, Ken Lait does not exist outside of the generative software of a project by MeFista Malevolent.  What Matt "Malevolent" Round has done is scrape the 650 mugshots from the UK parliament and used them to train a neural net to generate Looks Like an MP pictures. You can play with that here. Not only are the faces in some sense mix-and-match; the names of  these MPseuds and their constituencies are as well. It is of course ominous predictable how many of the iterations are well-fed, middle-aged, white dudes. It is also, for me, really edgy just how photo-realistic these artificial constructs are. No surprise, I guess, to people more familiar with video games: photoshop has come a long way! . . . but still has massive fails.

Here's another set of artificial human faces generated with StyleGAN. It is couched in a binary format to decide which of two pictures is real vs fake. I was hopeless at this task: scoring correctly only 1 time in 3 which is less than random. I bet I'd get better if I persisted because guessing-and-feedback is sort of what a neural network is all about. You can educate yourself in the theory of spotting fake-fotos.
Posted by BobTheScientist at 07:56