Who let the Daft Quants out?
On The Blob you can have any colour you want so long as it's black between #000000; and #FFFFFF; in hexadecimal RGB-speak. I've been tricking about with colouring words/letters since ever but a couple of weeks ago I started to put down some formal rules of engagement for colour formatting. Afterwards, I was fossicking around in the Irish political party space because we've just got a new government coalition, and suddenly up popped Categories: Irish Political Party Colours. There, some(obsessive)body has nailed single colours to the masts of all 93 political parties since the foundation of The [Free] State. This listicle naturally includes [s♩♫g ♩t] 40 shades of green but has a nicely variable palette, from NPD pink to Farmer's dung, for bar-graphs and pie-charts come election time.

A list of colours is data, and with data you can pose questions, form hypotheses, and then test them . . . you can do science. As these colours are what the party faithful choose to represent their values and their history, it might be worth asking whether political parties with similar values had similar colours or which was the most patriotic party - if you can define your terms for a) patriotic and b) distance / similarity. 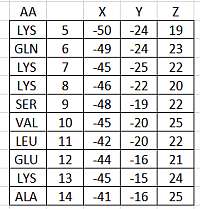 Distance first. At The Institute, I've been supervising final year research projects in molecular evolution and bioinformatics although the students haven't really any prior knowledge of the key concepts; nor have they learned any programming languages. But they can make a certain amount of progress with Excel if the evolutionary question is framed so that something interesting can be derived with quite simple mathematics. A couple of my students have been tasked to discover if particular amino acids are buried in the proteins of which they form a part, or if they are exposed on the surface . . . and so available as a drug target. The key Excel task for this endeavour is to calculate the distance between two amino acids in 3-dimensional space if their X-Y-Z co-ordinates are known. For a great many proteins, their X-Y-Z coordinates are known [example shown R: units are Angstroms - real small], and recorded in PDB the Protein DataBase, because someone has calculated the 3-D structure of the protein using X-ray crystallography or Nuclear Magnetic Resonance NMR.

Euclidean distance can be calculated from the rules for Pythagorean triangles: if 32 + 42 = 52 then the distance between the two points = 5 = ✓( 32 + 42). The same principle applies if you're dealing with 3-D space or flat X vs Y planes. I decided to treat RGB colour space as orthogonal axes like the X Y Z coordinates of 3-D protein space.

Criteria for Patriotism. You can surely not do better for an exemplar of patriot green than with reference to the official green that appears on the Tricolour which is not the same as full on lime #00FF00 green nor yet kelly #4CBB17 green but rather a green with quite a lot of blue[shirt]: #009A49. But the Founding Fathers [and Constance!] went to considerable pains to include The Others in the North. How else could they aspire to a 32 county country after all? So Orange is included in the Republic's flag. 32 county patriots would clearly aspire to include the lads from the North. One way to achieve this in a single party colour is [see calcs R] to take the average values for Green White and Orange to give a sort of olive-drab hide--in-the-bushes #555B18 sort of a colour. And the results? 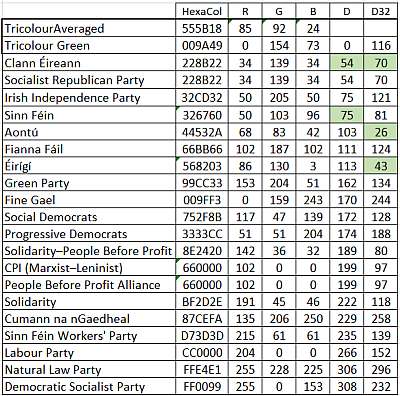 In the chart above, the column headed D is the green-only distance: how close party colours match the Tricolour Green. Winners Clann Éireann (founded Jan 1926: splitters merged with FF August 1927) and Socialist Republican Party (1944-1949) which adopted the same most patriotic colour but clearly flew too close to the fire of ardent republicanism and burned up in flames. Tied next in line are Irish Independence Party (1977-1985) and Sinn Féin which is still going strong.

The D32 inclusive-of-orange prize is won by the Éirígí [splintered from Sinn Féin 2006: no current elected reps] with Aontú [= Peadar Tóibín TD for Westmeath] as runner-up.