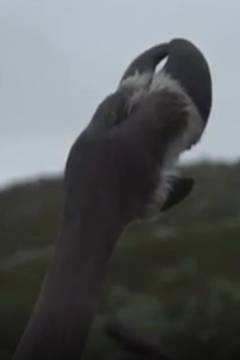 I follow a retired academic from Minnesota who blogs about butterflies and other things at tywkiwdbi. The signal to noise ratio there is better than large swathes of the blogosphere. Last week he cited a study about a holocaust [lightning strike in August 2016] of reindeer in Norway and who stood to benefit. The original study is one of several papers documenting the effects of leaving 300 Rangifer tarandus carcasses in place and seeing what happened.  Well, not the whole body, the heads were all removed and shipped to the state path lab to be screened for chronic wasting disease which I've been intending to write about for the last several months.

We have quite a lot of experience with the decomposition of artiodactyl carcasses because we're soft-hearted about offing our aged sheep. Possibly to avoid setting a precedent and finding our aged selves getting sent for thanatization as unproductive mouths surplus to requirements. We put a lot of back into burying the dead sheep until one of our neighbours confessed that he left them where they fell; finding that the foxes and crows cleaned them up in a remarkably short period of time. For a couple of years we carted the dead off to a secluded corner where the vulpine deconstruction could be carried out in peace. After the foot-and-mouth debacle of 2001, all Irish sheep had to be ear-tagged and accounted for; so now we have to call the local 'fallen animal man' and pay €30 to have him render the remains into GreyPak supermarket own-brand sausages.

Meanwhile back in Norway, the local meat bonanza on this remote section of birch and heather tundra was noticed and exploited by a variety of carnivores including raven Corvus corax, hooded crow C. cornix, golden eagle Aquila chrysaetos, red fox Vulpes vulpes and arctic fox V. lagopus [not Alopex no more] and wolverine Gulo gulo. You may be sure that there was a pecking order here: the top carnivores would be quite happy to eat crow. The main point of the Royal Society paper here considered is that rodents [root vole Microtus oeconomus, lemming Lemmus lemmus, bank vole Myodes glareolus, field vole Microtus agrestis and the grey red-backed vole Myodes rufocanus] steered clear of the site through 2017 and only returned the following year after the Big Boys had stripped the bones and dispersed.

Although these vertebrates are the most obvious beneficiaries / agents / actors in the process, it is important to acknowledge the importance of bacteria and fungi in the process: the stage names give clues about this activity - fresh - bloat - active decay - advanced decay - dry decay. Ligaments, hooves, bones, hair all persist long after the wobbly bits have gone. You might keep your eeeeuuw reflexes under control to view [smell-free!!] this clip from A Zed and Two Noughts the colourful and deeply peculiar film by Peter Greenaway scored by Michael Nyman. It's 2 minutes long and shows various corpses, from Apple to Zebra in busy-busy time-lapse, decomposing to Nyman's composing [Nyman & Greenaway bloboprev].

In an earlier study the same research group found that "scavengers direct seed dispersal towards ungulate carcasses",  they were particularly interested to find viable crowberry Empetrum nigrum [L] seeds from crow splat on and around the cadavers. It's hard for crowberry to get a start in the niche-filled natural ecosystem: the shoot has to fight up through the moss and heather to get enough light to photosynthesis. A gert big reindeer body, otoh, squashes the local plants and deprives them of light for several weeks and this levels the playing field for crowberry and other minority species. Who else benefits from the change in the local landscape? Meadow pipit Anthus pratensis for starters: they were observed picking off the blow-fly Lucilla sericata etc. larvae for dinner.
Posted by BobTheScientist at 07:30