Because of CoVid disruptions, I am effectively retired now, on full pay until 2nd October and on plenty-enough thereafter. Plenty-enough because I'm quite low-maintenance: not for me the bucket list, a newer car, cruise ships and eating out. If I need something to do, there is always The Blob the demands of which will spark me from sofa-somnolence to write 600 words on something curious. It just needs a trigger as I restlessly surf my corner of the Interweb and I'm down the rabbit hole . . . or in today's adventure, up the horse urethra.

It started when Wikipedia's recent deaths tag threw up: 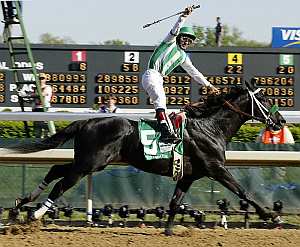 War Emblem [R], who he? I knew he must be an 'orse but why does he, dead, make the front page? And is there a connexion with Man O'War who famously ran against Seabiscuit and lost. For someone who is definitely not at the races, I've written rather a lot about horses and their End of Life Issues. Apart from all the Irish people who will die from Corona Virus picked up at Cheltenham 2020 [thanks lads] at least one horse Copper Gone West has been terminated there this year by a broken fetlock.

War Emblem was successful in his first career as a thoroughbred race-horse earning $3.5million, including 1st at the 2002 Kentucky Derby, for his owners. The usual retirement gift for such star race winners is to put them at stud, hoping that their spermatozoa can win the race up some mares' fallopian tubes to generate another generation of fast horses. War Emblem was kind of hopeless at that task, showing far too little interest in the opposite sex. This inevitably led to wry, easy-story, journalistic speculation that this stud might be gay. A horse like that can make far more through stud fees than in a life-time of race prizes, so he was a sore disappointment to the Japanese business that had taken a plunge on him.

Five years ago the old chap was repatriated to the USA [I'll leave it to you to work out what the carbon footprint is on these trans-Pacific horse-shuttlings] but couldn't be left alone by the USDA. They are concerned about a horse STD called contagious equine metritis CEM. This is a bacterial infection caused by a a betaproteobacteria called Taylorella equigenitalis. This causes inflammation [-itis] of the endometrium, the lining of the uterus which is kinda icky and affects the fertility of the mare at least temporarily - T. equigenitalis. usually succumbs if treated with the appropriate anti-biotic. Stallions are mostly asymptomatic so foreign imports have to jump through a bizarre diagnostic hoop sphincter if they want to stay in the USA. They are requested and required to jump two mares, who are subsequently swabbed out to check for the bacteria. Poor old War Emblem was no more interested in American fillies than in Japanese. The rule-and-regs won't allow 'entire' immigrant horses in the country so the only option was gelding. Which happened to him in Feb 2016 - he was only 17. Apparently, on 11th March, he was found 'dead in his paddock' at Old Friends Equine, a Kentucky retirement home for wealth-generating horses. I guess that's better than a dose of captive-bolt behind a hastily erected screen like that which terminated Copper Gone West in Cheltenham

We've met betaproteobacteria on The Blob before because that bacterial class includes Neisseria gonorrhoeae [hard to spell but easy to catch] and Neisseria meningitidis; and Bordatella pertussis the germ for whooping cough.
Posted by BobTheScientist at 07:31