On Sunday we had Mike the Vet to lunch and while he was on site, he looked at A for Annabelle on whom he had performed some extremity surgery two weeks ago. When the bandages were removed, the stump of the excised toe still looked a little raw but she is not favoring it as much as she did the day after the operation. In the interim, we have trotted the whole flock down and up the lane from their sunny field a few times for dosing and then delousing and to give a heptavac-P jab to the lambs.  This immune-booster is a mix of bacterial toxins from several species of Clostridium as well as formalin-killed Mannheimia haemolytica and Pasteurella trehalosi.  These are about as different taxonomically as you can get within bacteria. M.haemolytica used to be called Pasteurella haemolytica and they are both members of the gamma-proteobacteria which also contains old intestinal favorites like Escherichia coli, and serious pathogens like Vibrio cholerae.  Clostridium, otoh, includes the generators of botox and tetanus toxin and the troublesome C. difficile. I guess the lambs get treated for these disparate potential pathogens because they are the most likely suspects as lamb-killers.

On one of the trips up and down the lane, I noticed that H for Harriet [our flock is beginning to sound like a Squadron from Dambusters come in Red Leader] was a little limpy and when she made the trip two days later she was clearly favoring her right fore-foot. Accordingly we tipped her over, trimmed her hooves and gave her a generous spray of Footmaster which is bright violet in colour and seems to work as a cure-all for sheepy-feety problems. But on the way back to the field after treatment, she seemed to be quite weak-in-the-wind and had to stop to rest <pant pant> on the 100m journey. The foot-treatment seemed to have induced some improvement but we had Mike look at her anyway. He immediately concentrated on her other symptoms, noted the labored breathing, took her temperature (40.4oC, not good) and said "Pasteurellosis". That confidence of diagnosis, supported by decades of experience, is why we pay vets the big bucks.  He gave her a whack of anti-biotic but a very poor prognosis because Pasteurella does irrecoverable damage to the lung tissue, so it no longer has a tennis-court of surface area for gas exchange - hence the labored breathing.  We were advised to get her two lambs weaned asap and H for Harriet off to the factory because we were not going to get another year of breeding out of her despite her teeth being in working order ["full mouth"].  Dang!

With all this in mind I was primed to cry "synchronicity" when I heard [wikipedia In The News] that Saiga antelopes Saiga tatarica [R looking like an escapee from a Star Wars film], an endangered species of Central Asian antelope, are going through a Pasteurellosis crisis that has killed half of the remaining members of this species in May.  There used to be millions of these animals, extending all the way across Eurasia, with fossils being found in Pleisocene Britain and North America. In the same way that Cuvier could infer a whole animal from a single bone, and Buckland could understand a lot about food pyramids from dissection of coproliths, we are able to deduce what the climate and vegetation was like 2m to 10,000 years ago.  If Saigas were members of that megafauna, then the conditions were most likely like the dry grasslands in which present members of the species thrive.

We've lost the quagga Equus quagga quagga, a half-striped zebra from South Africa, the last example of which died in captivity in Artis Zoo in Amsterdam in 1883. That's a tragedy, but not a disaster because molecular evolutionists have extracted enough DNA from preserved Quagga skins to show that they are probably the same species as the plains zebra that used to be called Equus burchellii, but is now Equus quagga burchellii. It is another example on a tighter time scale of the whales-are-hippos story where the distinctive look of a species turns out to be caused by a very few, almost trivial, genetic changes. Like white folks, hmmm?

A little more worrying was the lost and found story of the Arabian Oryx Oryx leucoryx.  This striking creature was put on the IUCN Red List in 1986 after too many poor little rich kids from Saudi started to amuse themselves by fitting machine guns to their jeeps and roaring over the dunes playing budda-budda-budda with the helpless antelopes. Oryx have now been re-introduced to the wild from an Omani captive breeding programme and number 1,000 individuals. That population, coupled with 6,000+ more in reserves, parks and zoos around the world allowed the IUCN to reclassify Oryx leucoryx as merely vulnerable.  That's progress but the species has been forced through a serious genetic bottle-neck and its reduced diversity will make it more sensitive to the next pathogenic assault. 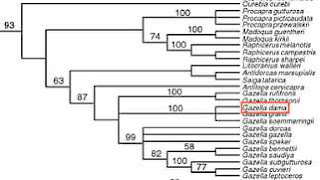 Pathogenic assault is what is happening to Saiga tatarica. It looks like the mortality among affected herds is close to 100% [like our own Ebola, hmmm?] and perhaps 50% of the documented 250,000 world population has died in the month of May.  Epidemiological results aren't properly in yet but it looks like the lungs of the dead animals are fritzed and that symptom is putting the smart money on Pasteurellosis. The genetic diversity in Saiga has collapsed since the Pleistocene and this will not have helped the species as a whole fight off a pandemic. A similar epidemic swept through the Russian Saiga population in May 2010, but the numbers slowly recovered. Each time death comes swinging his scythe wholesale, the genetic diversity slumps, making the species more susceptible to the next pathogen. Despite its weird proboscis, the Saiga is closely related to the Springbok Antidorcas marsupialis [R for phylogeny]. There is no suggestion that A. marsupialis is particularly susceptible to Pasteurella spp.; that is what makes comparative immunology so interesting.  You'll have to forgive me if I become an artiodactyl-bore over the Summer, it looks increasingly likely that I'm going to do my new 4th Yr course at The Institute by working through the cetartiodactyla.
Posted by BobTheScientist at 07:21