Call me Calvin, but I do have a thing about waste; especially food waste. Not sure where it came from but it can be hard work while living with a family who are chronic over-caterers. My cooking relatives always include The Unexpected Guest in their portion control. We live so remote that unexpected guests are really rare even at Christmas time. In normal times, I am eating alone for about half the week because The Beloved is away minding her dear old dad in Waterford. Standards definitely drop when I'm looking after myself: why use a plate if you're going to have to wash it up later. My own dear old dead dad used to cite Dean Swift and the Boot-boy whenever we used to cut corners on standards. But, heck, the old man is dead so I <la la la> can't hear him.

Several months ago, we acquired three packets of "bread-crumbs" on the cusp of their sell-by date. I'm fairly sure that, if we still kept chickens, those food-like products would have been converted to eggs but absent chooks I popped the bread-crumbs into the deep-freeze imagining that I'd find a use for them. Eeee, I do like a treacle tart which is basically a flan-case filled with golden syrup and enough bread-crumbs to stop the molten golden slopping over into the bottom of the oven. And I was intending to use some crumbs in this sicky-sweet manner but in October the coconut granola muscled its way to head of the sell-by list and into Sweetie-pie Thrifty Pie. Needless to say, I got zero help in ploughing through this daunting dessert. And having done that, I sank back exhausted from the task of using up the effin' bread-crumbs.

I have talked about pink slime before: it is the central ingredient in Irish sausages and you don't want to enquire to closely about its origins. Two weeks ago, I was in the supermarket, buying my 'umble groceries - and a mighty slab of marzipan against the next Xmas cake. The lady behind me had a bright pink cylinder of sausage meat and I said I'll have some of that next time I'm in Tesco. She was probably intending to make rissoles even through she didn't live in Wexford. Me, I reckoned that if only I had some bread-crumbs I could do my bit for rissole nirvana. And the following Saturday The Beloved and I were on a rare road-trip together and rocked up the Tesco Superstore in Gorey where I was spoiled for choice for Irish Pork Sausage Meat: 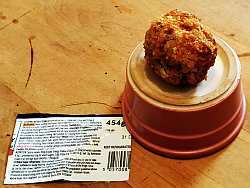 The expensive stuff[ing] might be 25% more expensive but it has 21% more pork {and accordingly less water) and added white pepper and nutmeg <ace!> but less vitamin C <boo!>. In the spirit of Christmas, I went for the more expensive option, not least because the contents looked like it had some structure . . . or at least flecks of different shades of pink. I tried a few recipes but found that equal(ish) weights of bread-crumbs and pink and a child's handful of finely diced onion worked nicely. Less bread-crumbs exuded a puddle of fat . . . oh yes, and an egg beaten in certainly help glue the rissoles together. Baked in the oven is good because we are no longer allowed to deep-fry them in lard like my mother did in the 1960s. <yum>The last rissole took a selfie [R] on an appropriately pink plinth just before it fulfilled its destiny as food. </yum>
Posted by BobTheScientist at 07:21